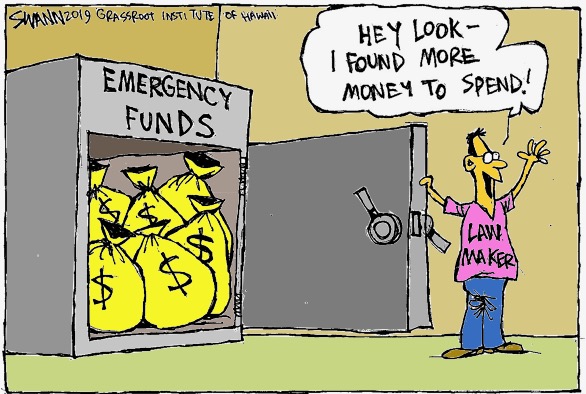 The governor’s updated budget for 2021 shows the excess spending would be covered by money taken from the state’s dwindling surplus, which currently stands at $587 million, down from $752 million in fiscal 2020. The surplus is on track to be drained to only $63 million by fiscal 2023.

Keli‘i Akina, president and CEO of the Grassroot Institute of Hawaii, called the governor’s budget irresponsible.

“Bursting through the state spending limit is bad budgeting,” Akina said. “This puts Hawaii taxpayers at risk and raids the state’s surplus at a time when we should be saving for a rainy day.”

Hawaii’s constitutionally mandated general fund spending cap is tied to the average growth in personal income growth over the previous three fiscal years.[4] This would put the cap at $8.503 billion for fiscal 2021, yet overall Ige is proposing to spend $8.542 billion.

The rolling ceiling is also updated every calendar year for the previous fiscal year. The newly updated cap for fiscal 2020 is $8.167 billion, but the governor is proposing to spend an additional $92 million in fiscal 2020, which would increase the total to $8.195 billion.

The $92 million in additional spending in fiscal 2020 could be inserted this year through different appropriation bills that are submitted by the executive agencies, or Ige could pass it through his amended supplemental budget proposal.

The state Constitution allows the Legislature to override the spending limitation with a two-thirds vote in both houses, which it usually does, essentially making the law a paper tiger.

Akina of the Grassroot Institute cautioned against bypassing this spending limit.

“The spending cap is in place,” he said, “to force the state to balance its competing demands without resorting to raiding the surplus or increasing spending beyond what taxpayers can afford. Lawmakers should hold the line on the state’s spending cap.”
_____________

For more information or to arrange an interview with Grassroot Institute of Hawaii President Keli’i Akina, please call Mark Coleman at 808-386-9047 or email mark.coleman@grassrootinstitute.org. The Grassroot Institute of Hawaii is an independent 501(c)(3) nonprofit research and educational institution devoted to promoting individual liberty, economic freedom and accountable government.