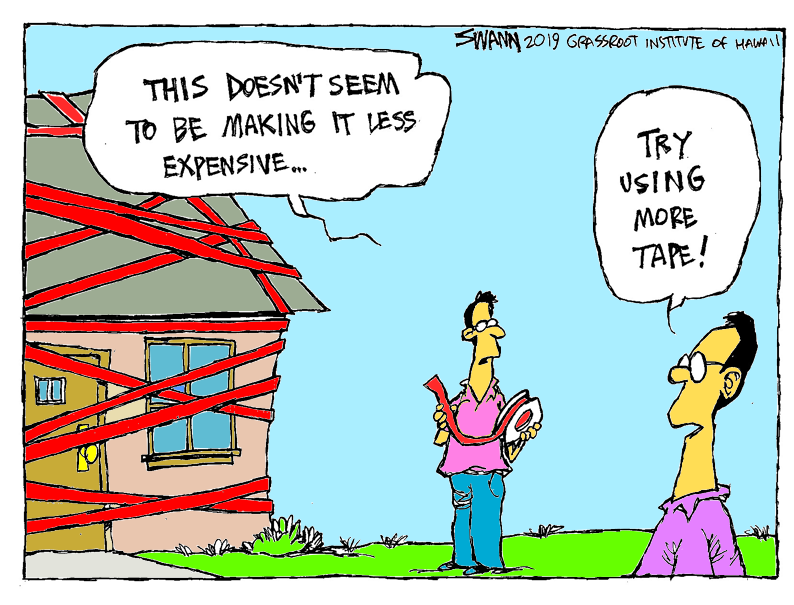 The lack of affordable housing in Hawaii is on everyone’s mind. State legislators have responded with a wide variety of proposals that include everything from government building projects to incentives for developers.

Then there’s the constitutional amendment.

Three Senate bills proposing an amendment to the state Constitution that would require the state to build enough housing to “meet demand” have been given hearings so far. Two of those bills — SB2046 and SB3063 — are still alive.

Obviously, there are myriad problems with adding such an amendment to the state Constitution, especially considering the extent of homelessness in the islands.

Would the state now be required to build homes? How many? Where? How much would it cost? Who would pay? Would the state be allowed to ignore its own land-use rules to build new homes? What about people who don’t want to live in government housing? What about people who are simply suffering from the high cost of housing but don’t qualify for government housing? What about when people start suing the state for not fulfilling their “demand” for housing?

We could fill hundreds of pages with “what if” scenarios, none of which appear to be contemplated by the proposed amendment. It’s almost as if the sponsoring legislators believe they can solve the housing crisis by just shoving it into the state’s Constitution. Not enough housing? Well, now the law says there has to be enough. Ta-da!

That’s all it would require. Instead of taking the burden of providing housing-for-all onto itself — and therefore the taxpayers — the state just needs to get out of the way and let the free market go to work.

Imagine how powerful such an amendment could be. In one stroke, we could do away with ridiculous bureaucratic delays in the development and construction of new housing. Irrational zoning regulations would be a thing of the past. The market could respond to the actual needs of homebuyers, not their imagined needs envisioned by politicians.

The biggest irony of the proposed constitutional housing mandate is that the legislators who support this idea think more government intervention is the way to solve our housing crisis. The reality is that our people want houses, developers and builders want to build those houses, and it’s only the politicians’ land-use laws and regulations that make producing more housing so difficult.

More mandates and government red tape won’t build houses. Only contractors can do that. So why not get out of the way and let them do it?