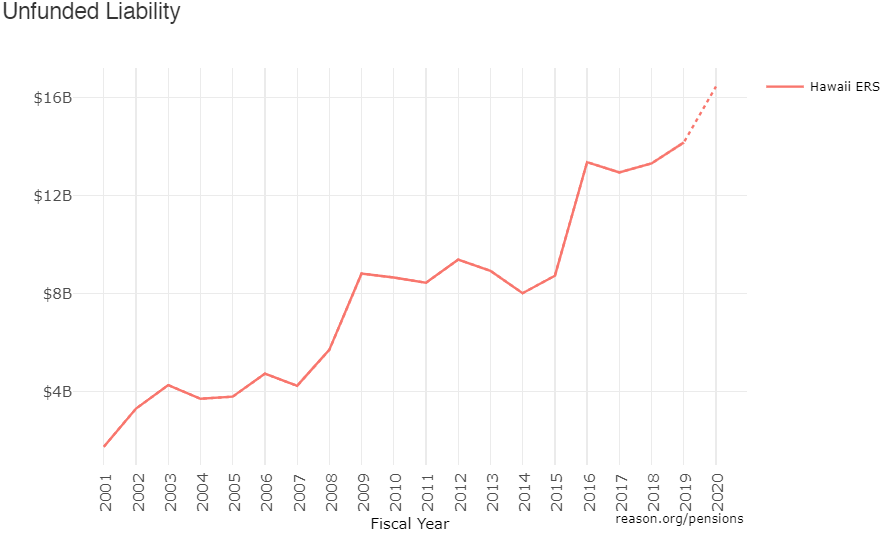 Major reforms could help the pension system honor its promises

HONOLULU, April 29, 2020 >> If you think Hawaii’s unfunded public pension liabilities of $14 billion[1] are daunting now, brace yourself for what they could be in just a short while.

A new tool from the California-based Reason Foundation shows that if the system’s investments decline significantly during the next year, thanks to the coronavirus recession, its total unfunded liabilities could go through the roof.

Developed by the foundation’s Pension Integrity Project, the tool estimates that an investment value decline of between 5% and 25% would increase the system’s unfunded liabilities to between $16.5 billion and $20 billion.[2]

A financial stress test by the ERS’s own managers shows that if the system’s investments decline in value by 20% this year and returns are only 5% in subsequent years, its unfunded liabilities could triple by fiscal 2049 to $44 billion.[3]

That would threaten the ability of the system to pay the benefits it has promised to Hawaii’s retired public employees. It also would bust the budgets of the state and counties, which presumably would turn to Hawaii’s taxpayers to help bail them out.

According to the Pension Integrity Project, a 5% decrease in the value of the ERS portfolio would put Hawaii residents on the hook for $11,625 per person; a 25% drop, $14,047. It would be the third worst per-capita public pension debt in the nation, behind only Alaska and Illinois.[4]

Normally such projections might seem like crying wolf, but these are not normal times. The nation is reeling because of economic troubles triggered by the coronavirus pandemic, and there is no telling how deep state pension fund losses around the nation, including Hawaii, could go.

The Grassroot Institute of Hawaii has been warning for years about the growing unfunded liabilities of the state Employees’ Retirement System. Keli’i Akina, institute president and CEO, said the current situation truly is a wake-up call.

“When the public pension system is in trouble, so are taxpayers and retired public workers,” he said.

With tax revenues also falling because of the recession, he said, state and county lawmakers will find it harder to pour more money into the fund, and taxpayers need to be on guard against any new tax-increase proposals to bail out the fund.

“Hawaii policymakers could have prepared for a black swan event such as this long before,” Akina said. “Now Hawaii’s leaders will need to have difficult conversations about the long-term sustainability of the public pension system. Reforms such as new plan options for new employees, changes in vesting periods and an end to pension spiking could help mitigate against further unfunded liabilities.”

That report is as relevant now as it was then, if not more so.