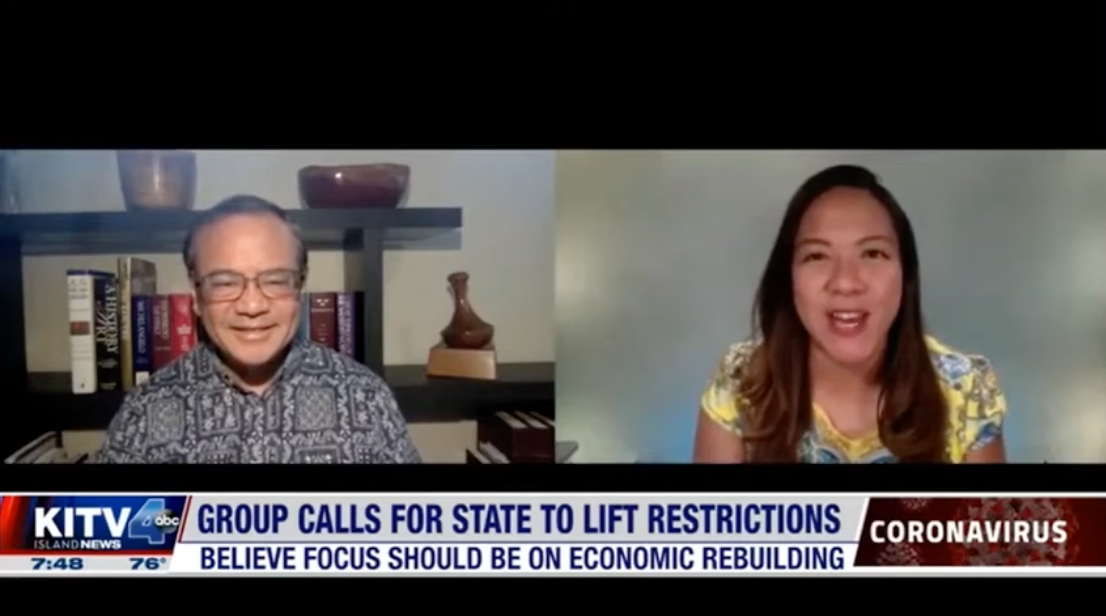 Keli’i Akina, president of the Grassroot Institute of Hawaii, was interviewed Friday, May 2, 2020, by KITV4 news reporter Annalisa Burgos about the institute’s call for Gov. David Ige to “Let Hawaii Work.”

Annalisa Burgos: There’s growing sentiment that Hawaii’s lockdown should be lifted, and a local think tank is launching a new effort to push for economic recovery. Joining me now is Keliʻi Akina. He is the president of Grassroot Institute of Hawaii. It’s good to see you, and thank you for being with us today.

Keliʻi Akina: Annalisa, it’s a delight to be on the program today. I want to say aloha to all of the KITV4 listeners and viewers.

Burgos: Wonderful. I wanted to give you a chance to talk about your efforts at the institute to reopen the economy. There’s some pushback against massively reopening it. What’s your take on all of this?

Akina: I think it’s important to clarify that we’re not saying, “Throw caution to the wind.” We’re not saying, “Instantly open up everything.” I think we have to take a rational pathway back to rebuilding the economy. Really, one of the things that is most heart wrenching is every day, I’m talking with people whose lives have just been utterly shattered by the fact that they can’t go back to work, or businesses that have had to shut down and are unable to employ so many people. That’s really tragic.

Last night, I was on the phone until about 10 p.m. with a business owner, and people would know who this is if I gave you the name. He has four restaurant bars that are very popular here in Hawaii. He was alone in his office crying inconsolably because he had just yesterday had to fire 80 workers and shut down his business. He can’t make a go of it anymore.

Burgos: Aside from those really heart-wrenching stories that you were mentioning is the public health aspect. How do you balance the need for more widespread testing to really get a grip on how far this virus really has permeated our community, because a lot of them are asymptomatic as we’ve seen reports and studies of this?

Akina: I think it’s important to understand that the public health needs and reopening the economy are not either/or. It’s not one or the other. The fact is, we have to go aggressively after both goals. We need to keep the public safe, but we also need to begin opening sectors of the economy. I think one of the great things that has been done by our frontline workers and our government officials over the last two months is to teach people how to social distance.

That’s something we didn’t know how to do at all. We’re the Aloha State, and we’re always hugging each other and kissing each other, and we’re very close to each other. The point is we’ve learned a new behavior. The time has come where we need to allow businesses and individuals to exercise that behavior and make rational choices and take rational risks.

Burgos: What’s your assessment of the government’s response to the economic fallout? We often talk about testing and the public health aspect as you’ve mentioned. What about the economic recovery? Have they done enough?

Akina: That’s a very good question. Economic recovery is not simply giving handouts. That’s my major concern, that while it is so valuable to have an immediate safety net for people, and the ability to get them food, and get them shelter and immediate medical care. That’s a very temporary response. The fact is, the government simply does not have the resources to continue providing this type of response. What we have to do is get the economy back into shape again. We’ve got to let the private sector employ people. We’ve got to have jobs that provide income. That’s going to be the solution in the long run.

The longer we wait, the longer we delay getting the economy back into shape, the more long-term damage we’re going to have. Already, our state can’t weather that. We’ve got more than $88 billion of unfunded liabilities that we have to pay. This is before the coronavirus crisis came. That was the state’s own fiscal condition. In other words, over the next 30 years, we owe $88 billion that we don’t have, but with the coronavirus, the shutdown of business and the loss of tax income, that figure has been boosted, and that’s a terrible thing. It’s very important that we not delay at all at least moving forward in a rational way to begin rebuilding our economy.

Burgos: Is there any specific recommendation you would offer to get this done?

Akina: Oh, absolutely. At the Grassroot Institute, we’re working on a project that we’re going to send to the governor very soon called … “Roadmap to Recovery.” This is a report that lists at least 20 things that we can do starting immediately that will help rebuild the economy. Some of them are very minor. Some of them are very major.

Let me give you an example of one that would be very easy.

There actually is a silver lining in terms of what has taken place and the coronavirus, in terms of the area of the shortage of physicians that we have in the islands, especially on the neighbor islands. Thanks to the immediate emergency measures, we’ve been able to allow physicians from out of state to practice here, and the practice of telemedicine has taken off. After the coronavirus crisis passes, let’s continue that. Let’s keep that regulation away so that we can help solve the physician crisis.

But there are many other things as well that we can do. One of them, in particular, is we can reform our zoning and land- use laws just to open up a percentage or two more of land so that we can increase the construction of homes and bring down the cost of housing, both purchasing and rental.

In addition to that, we can reduce and eliminate several taxes. One, in particular, which hurts those at the lower-income stratum, is the fact that we have a GE (general excise) tax that charges taxpayers on medical as well as food. We should eliminate that because that hurts those who are at the lowest level of the economic ladder.

We launched a petition drive. It’s online at lethawaiiwork.com. Within the first 24 hours of the soft opening, we had over 1,500 people sign up. Anyone can go to lethawaiiwork.com and let their voice be known. What will happen is that that petition will go straight to the governor and to our public officials.

Burgos: Keliʻi Akina there, with the Grassroot Institute of Hawaii. Thank you so much for joining us.