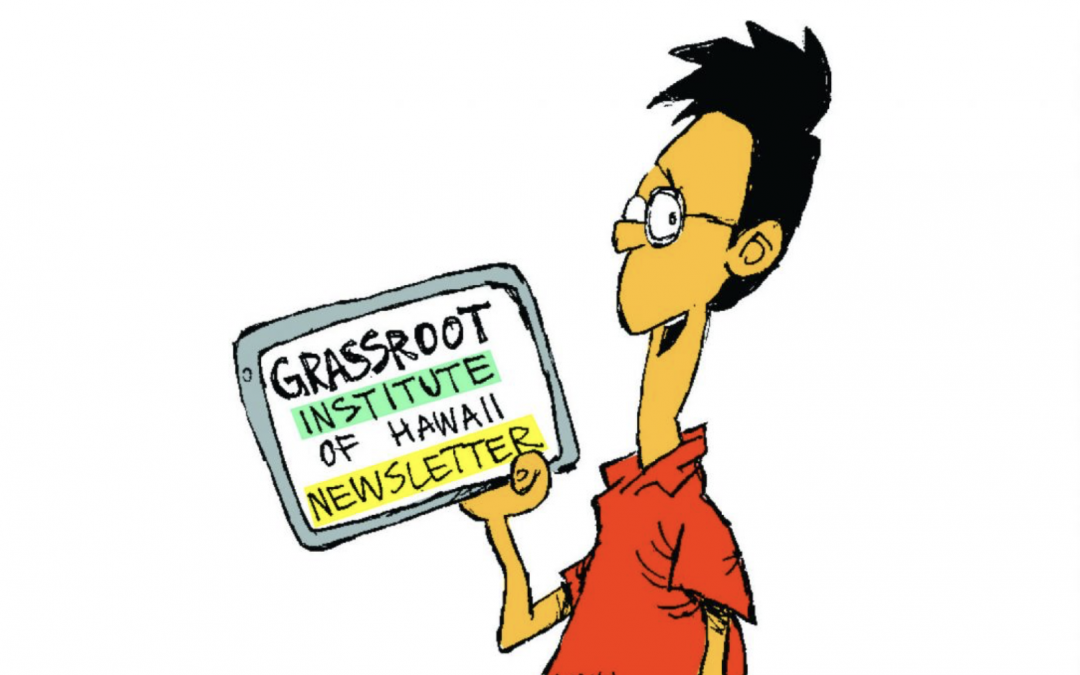 After a long career in newspapers, David is now wielding his drawing pens to advance economic freedom

And humor, of course, is an effective and wonderful way to highlight the foibles of the powers that be.

A native of Huntsville, Alabama, Dave did a lot of drawing growing up.

However, it was not until after serving in the U.S. Air Force that he decided to make a career out of it.

At age 23, he applied for a job at The Huntsville Times, where he worked for nine years. He produced comic strips for the newspaper’s sports section but transitioned into graphic design when the Macintosh computer was released.

In 1994, he applied for a job as a graphic artist at The Honolulu Advertiser and moved to the islands.

Melissa Newsham: So you’re originally from Alabama. What made you want to move all the way to Hawaii?

Dave Swann: I had been wanting to move somewhere different to be able to see new places and broaden my horizons, that kind of thing. I had never been to Hawaii and I thought, “Well, how bad could it be?”

Whenever you say the word “Hawaii,” everybody always goes, “Oh, wow, you live in Hawaii?” You’re obviously a very fortunate and special person to be living here. Alabama and Middle America, there’s nothing wrong with it, and it was a nice place to grow up.

But I had been there in my home town for 30 years — aside from being in the military. I felt that I had done enough of that. I got here when I was 31, and it really did change my life in a lot of ways.

Q: How did you get involved with the Grassroot Institute of Hawaii?

A:  In 2016, when newspapers really started having trouble, I got laid off from the Star-Advertiser with a bunch of other people. I was 54 and a little too young to be retiring for good. So I talked to [former Honolulu Star-Advertiser journalist] Mark Coleman and he said he was working at the Grassroot Institute.

He set up a meeting with Joe Kent [Grassroot Institute executive vice president] and we talked about whether I could maybe supplement the gray matter that you guys write up with some cartoons.

I’ve been doing this for two and a half years now and I enjoy it. And it’s great people to work for.

I’m really fortunate that I had a [newspaper] career when I did because if I was just starting out now or halfway through my career, I would be really in a lot of trouble.

These jobs, the types of things that I did, are gone for the most part. You can still produce things for the internet, but as far as being able to draw an illustration or a cartoon for a living, it’s just getting harder and harder now.

I think there’s less than 20 full-time paid editorial cartoonists in the country now. That’s 20 out of 325 million people. Those odds are worse than being a professional athlete.

And it really is sad that it’s dying, but I really have to look at it that I was lucky that I did it when I did it.

Q: Was the mission of the Grassroot Institute something you were drawn to?

A: Yeah. You know, I have a passing interest in the issue of economics and how the government plays into that. I’m not political very much as a person, but I’ve always been a political observer.

Q: The high cost of living is obviously one of the things that the Grassroot Institute focuses on. What has been your experience, having lived somewhere else with a much lower cost of living and then moving here to the islands?

A: It’s tough. My wife and I don’t have any children, so we didn’t have to try to raise children and put them through school and college and all of that.

I don’t really know how the average family can get by and raise kids. Not only are the small things expensive, but the housing also. I had been warned before coming to Hawaii about how expensive it was to live here, and that only if you were a millionaire could you live here and have a nice life.

But the thing about Hawaii that’s different than most places is that you don’t necessarily have to make a lot of money to have a nice life. And what I mean by that is, if I were more materialistic and into the cars and all of those nice things, it would be difficult. But it is possible to not make that much money and still enjoy the things about Hawaii that make it great.

You do have to make a minimum amount to just get by, but it’s still a nice place for people like me who just like to live simply.

A: I try really hard to use metaphors. My biggest focus when making the cartoons is to make it as direct as possible.

When you work with a metaphor, it’s really important for the reader to be able to understand it instantly and not have to sit there and ponder it.

It is a challenge because when you come up with it, you have to put yourself in the shoes of the reader and realize that they’re not in your head and they don’t know what you’re trying to say.

So what I tend to do is, I take a basic idea that Joe or Mark has come up with and I basically put it into some sort of context like a metaphor. I kind of see the world in those terms so it’s easier for me.

I think the main thing I try to focus on is to keep it direct and make it funny. Because if it’s not really funny, I think people tend to lose interest.

Q: What has been a source of inspiration or encouragement during this really weird and tough time?

A: I try to keep things in perspective. I can think back to history class and learning about the Spanish flu and how 30 million people died. Even though I haven’t experienced anything like that, I’m trying to focus on how things could be a lot worse.