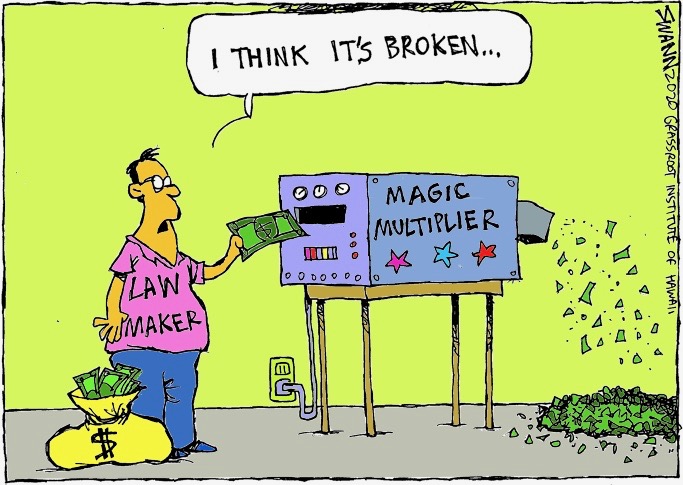 In the rush to mitigate the economically devastating impact of Hawaii’s state-mandated shutdown, many lawmakers and policy wonks have been invoking “the multiplier effect.”

For example, when Gov. David Ige announced in early April he was considering cutting public employee salaries by 20%[1] — to balance the estimated $1.5 billion drop in state tax revenues[2] — some opponents countered that every $1 dollar of government spending has a “multiplier effect” of $1.50 in downstream economic activity, so the state should keep spending.[3]

Despite almost 40% of Hawaii’s workforce being unemployed, they also suggested a variety of possible tax increases, and held out hope that Hawaii might be able to secure emergency loans from the federal government, which allegedly “has vast borrowing capacity without balanced-budget restrictions.”[4]

Nevertheless, Ige did have the right idea, and if Hawaii’s lawmakers wish to save our state economy from its current freefall, they must not be afraid to reduce state spending.

The multiplier effect, of course, was popularized by British economist John Maynard Keynes, and is a standard argument for evermore government spending.[5] The multiplier effect is so significant, its advocates argue, that it’s worth it for Hawaii to borrow up to $4 billion dollars from the federal government and repay it over two years by implementing temporary additional future taxes on Hawaii residents.

But many economists dispute the so-called multiplier effect, holding that government spending more typically hinders economic growth, partly by crowding out private borrowing.[6] This, in turn, depresses capital investment by the private sector, which is the true source of economic growth.[7]

As economist Milton Friedman famously used to say, “There ain’t no such thing as a free lunch.”[8] In other words, the money that a government spends has to come from somewhere. And if it isn’t obtaining it directly from the taxpayers, it’s borrowing it for taxpayers to pay in the future, with interest.[9]

Of course, if you are the federal government, you also can simply print money out of thin air, but that causes inflation and reduces the purchasing power of money for everyone — a hidden tax, essentially.[10]

So basically, asking our cash-strapped federal government to lend us money — which it would have to do through borrowing of its own and printing money out of thin air — is basically a beggar-thy-neighbor policy that would shift some of the burden of our spending to people in other states, in exchange for higher future taxes, both state and federal, and the hidden tax of inflation nationwide.

Not only that, when Hawaii’s state and county governments spend, they often do so wastefully — on megaprojects such as the over-budget, behind-schedule Honolulu rail; on bureaucratic bloat; or on inefficient services that the private sector could be delivering at a higher level of quality for lower cost.[11]

That’s why tax cuts can boost an economy, because the dollars are kept in the private sector and used more productively.[12]

Keynesians counter that the boost from $1 of spending is more than a $1 tax cut because the taxpayer being allowed to keep his or her own money will save a portion of that, and saving is bad because it is “leakage” from the economy.[13] They argue that a dollar saved is a dollar wasted or, at least, a dollar not spent in the economy.

However, this ignores the fact that savings are not hidden in people’s mattresses. Savings are borrowed by investors, and thus spent in productive ways for future growth, rather than immediate consumption. Savings help the economy in the long run because the money is directed toward more productive activity. For example, saving for a future college education might be more productive for an individual than spending now on a surfboard.

Economist Dan Mitchell even argues that the multiplier effect of government spending is actually negative, since many government actions hinder economic growth of the economy through regulatory barriers.[14] This should compel lawmakers to cut regulations swiftly so as to reduce economic hurdles.

Such barriers also contribute to Hawaii’s high cost of living, magnifying the cost of housing, food, healthcare and all other goods and services “essential” to our lives.[15]

They could also lobby the federal government to reform the protectionist maritime law known as the Jones Act, which adds to Hawaii’s high cost of living, and which, at the moment, is politically vulnerable.

Something else to consider is that Hawaii’s fiscal 2021 general fund budget is $8.7 billion.[20] A 20% cut would shrink it to the fiscal 2015 level of $6.9 billion, adjusted for inflation.[21] That means today’s taxpayers are paying an extra $1.7 billion annually to provide public services for fewer people.[22]

Lawmakers should have saved those windfall dollars for a rainy day, as we at the Grassroot Institute warned many times.[23]

Instead, they spent their reserve funds on growing department budgets, payroll increases and other nonemergency items.[24] This fiscal irresponsibility reduced the capacity of government to handle the hard times today.

It’s time for Hawaii’s government to face the hard fact that cutting government spending is the only way to put money back into the economy without saddling taxpayers with extra burdens.

It is surely reasonable that as taxpayers are forced to tighten their belts, so should the public servants who are dependent on them.

Shrinking Hawaii’s government spending by 20% would still allow for satisfactory public services for residents —especially if private contracting of public services were encouraged — while keeping enough money in taxpayer pockets to sustain economic growth now and in the future.
_______________