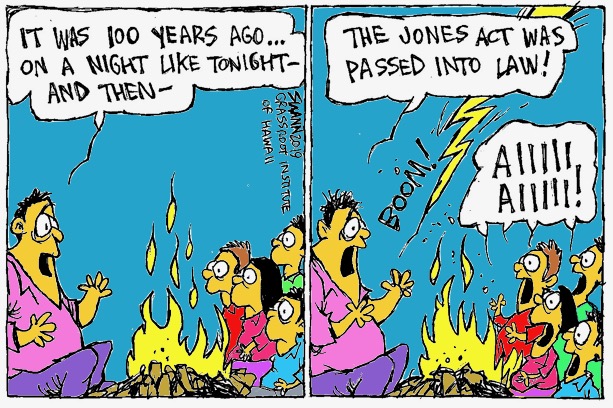 HONOLULU, June 5, 2020 >> Today marks the centennial of the Jones Act, the federal protectionist law well known for restricting the shipment of goods between U.S. ports, thereby adding to Hawaii’s high cost of living.

Keli’i Akina, Grassroot Institute of Hawaii president, said the best possible gift for this 100-year-old law would be to give it a facelift.

“In the century since the Jones Act was enacted, we have seen vast political, technological and economic changes,” Akina said. “The act is long overdue for an update.”

In particular, Akina recommended that U.S. companies be allowed to buy less-expensive ships of a wider variety from overseas manufacturers — a practice currently prohibited by the Jones Act.

The Jones Act, also known as the Merchant Marine Act of 1920, requires that goods shipped between U.S. ports be carried on ships built and flagged in the U.S. and owned and crewed primarily by Americans.

“Simply eliminating the build requirement could make a real difference to an economy already reeling from the coronavirus lockdowns,” Akina said. “This is the kind of common-sense reform that would lower the act’s costs to families and businesses alike, without sacrificing national security or jobs.”

In a retrospective of the Jones Act’s history published yesterday, Grassroot Institute research associate Jonathan Helton outlined how the act also has inadvertently crippled the American maritime industry, contrary to one of its main goals.

That is just one more reason, Akina said, we should celebrate the Jones Act’s anniversary by “bringing it into the 21st century.”