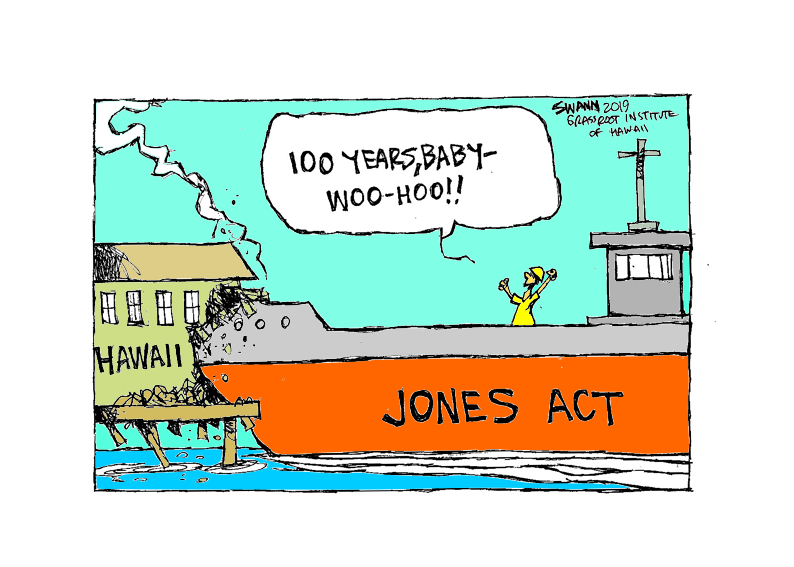 June 5, 2020, was the 100th birthday of the protectionist federal maritime law known as the Jones Act, which restricts cargo shipping competition between U.S. ports and adds to Hawaii’s high cost of living. A week earlier, one of the nation’s top experts on the act, Colin Grabow of the Cato Institute, was the featured guest of a webinar sponsored by the Grassroot Institute of Hawaii, “How the Jones Act undermines national security.” These were his concluding remarks of his opening presentation, followed by one of the many questions from the audience and his answer.
_________________

The Jones Act is a fatally flawed law, not just from an economic perspective, but from a national security perspective as well.

It turns out that fostering an uncompetitive shipping sector and saddling domestic shipping companies with ships that cost up to five times more than those built abroad is a pretty poor way of promoting the U.S. maritime sector.

First off, repealing the U.S.-build requirement should be a no brainer. This is protectionism with huge downsides for a sector that barely exists. Get rid of this provision alone, and the number of U.S.-flagged ships and mariners both go up. Cheaper ships, more ships; more ships, more mariners.

For me, the ideal outcome would be to repeal the Jones Act entirely and then meet U.S. national security obligations through subsidies or government programs. For example, the Jones Act’s only real contribution to national security is mariners, and even then, it’s clearly insufficient given the projected deficit in mariner numbers. Well, rather than impose this very costly protections law, why not set up a merchant marine reserve to ensure sufficient mariners, or grant wage subsidies to companies that employ those mariners with the provision they can be called upon in time of war. Or even let some foreign mariners serve just as we allow foreigners to serve in the U.S. military.

If we want more ships, why not expand the maritime security program, which is a program that gives $5 million to ship owners in exchange for being able to use those ships in time of war. It’s currently 60 ships, and we could make it more ships. Also, point out, this would be a more equitable means of meeting our national security obligations. Why should the noncontiguous states and territories, which account for a tiny amount of the U.S. population, have such a disproportionate burden of funding this alleged national security benefit of paying for these ships? It’s not fair. It’s not equitable.

This would be an incredibly more efficient way of meeting the country’s national security needs, if we adopted such programs or subsidies. The problem with the Jones Act isn’t just that is it inefficient, but that it’s failed. It’s not working. The fleet is in decline, the ships are old, there’s not enough mariners.

We need to stop doing more of the same. It’s time for a radical rethink. It’s time to get rid of this archaic law, both for our economy and our national security.

During the Q&A portion of the event, viewer Ralph Sherman asked: Who opposes the repeal of the Jones Act?

Some people are surprised when they hear that the carriers are in favor of the entire Jones Act. I think some people wonder why. Why don’t they just call for repeal of the U.S.-built requirements so they can buy cheaper ships? I think what we need to understand is that for Jones Act carriers, it’s actually an asset to their perspective for a couple reasons.

One, the domestic-build requirement adds to the value of their ships on because people can’t buy cheaper ships. The book value would plummet. But also it would lower the barriers to entry into that market, and they could potentially have a lower-cost competition with new, cheap, foreign-built ships entering the market and driving them out. They have very much bought into the status quo and love the fact that there’s a U.S.-built requirement, because keeping the price of U.S.-built ships high is great for them. It’s a barrier to entry and reduces competition.
________________

Colin Grabow is a policy analyst at the Cato Institute’s Herbert A. Stiefel Center for Trade Policy Studies, where his research focuses on domestic forms of trade protectionism such as the Jones Act and the U.S. sugar program. His writings have been published in a number of outlets, including USA Today, The Hill, National Review and The Wall Street Journal. He is co-editor of a new book on the Jones Act that includes a chapter by Grassroot Institute of Hawaii President Keli’i Akina, “The Case Against the Jones Act.”