Happy Fourth of July, despite the irony 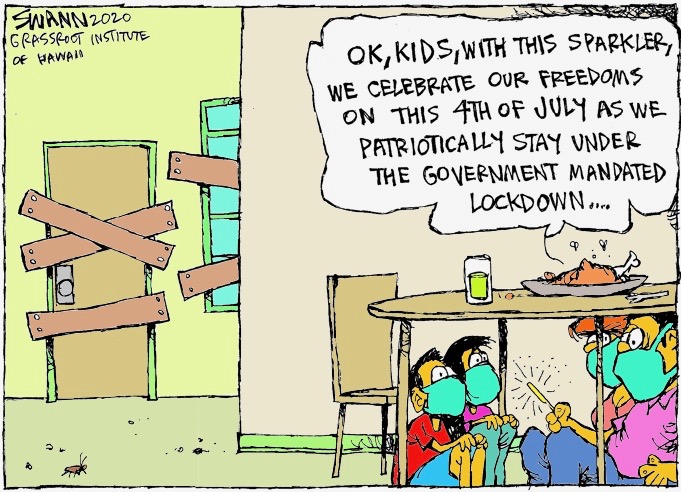 This week, we celebrate the nation’s independence … while still under lockdown.

Usually, we associate the Fourth of July with picnics, parades and fireworks, all celebrating that day in 1776 when the Continental Congress adopted the Declaration of Independence.

This year, however, most municipalities have canceled their Independence Day celebrations. For many people, this will be the first Fourth of July where liberty — and its loss — is the real focus of the day.

The COVID-19 pandemic and the lockdowns that began in March have given us the opportunity to see how unchecked, centralized power, even on a temporary basis, can erode basic freedoms. Just a year ago, it would have been outrageous to suggest that by July 4, 2020, we would have seen people demanding the freedom to go to work, open their businesses, attend church or sit on the beach. But yet, that is exactly what has happened.

Constitutional attorneys have assured us that the fundamental rights listed in the Constitution — such as freedom of speech, freedom of the press and free exercise of religion — cannot be  stifled during public emergencies. Our state and local governments have inherent “police powers” that give them great latitude in their efforts to protect public health, but that doesn’t mean our governor or mayors can infringe upon our basic rights.

The U.S. Constitution, after all, was created during a time of great national turmoil. Its framers held that certain rights were so important that they needed protection at all times. The Founders weren’t just thinking about war and foreign threats when they wrote about liberty. They were also familiar with public health threats, like the smallpox epidemic that occurred during the years of the American Revolutionary War.

With such threats in mind, they crafted a document that was intended to see us through good times and bad. For more than two centuries, the American Constitution has protected our liberties. True, there were times of regret during the course of our history, but it remains the most noble experiment in human freedom ever seen.

Looking forward, we must remember that our liberties are only as strong as their defenders. This, of all Independence Days, is a good time to reflect on that essential truth.

I recognize that the governor has had an unenviable task. It is no easy thing to protect the public health during a pandemic without infringing upon freedom. It is a balancing act that always threatens to tip too far to one side or the other. Thus, it is important to have watchdog groups prepared to alert the public when the restrictions on liberty have gone too far. Otherwise, there is a risk that those freedoms won’t return once the emergency is over.

That is why the Grassroot Institute of Hawaii has been so active in promoting rational debate on the issue of liberty and the pandemic. We are here to ensure that individual liberty always has a strong defender in Hawaii.

I hope that you will enjoy a happy and healthy Fourth of July, even if it is slightly more subdued than usual. More than that, however, I hope that you will spend just a few minutes of that day reflecting on our freedoms and the need to uphold them.

We have been told that “eternal vigilance is the price of liberty.” While we respect the role of our state and county governments in keeping us safe and healthy, we must never let our guard down.