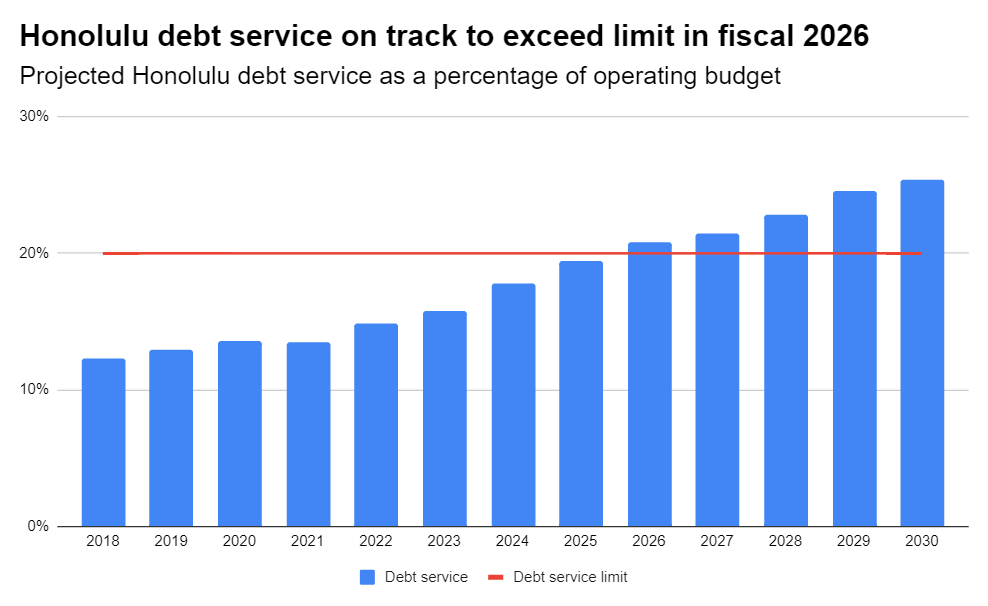 The Grassroot Institute of Hawaii has concerns about the City and County of Honolulu taking on too much debt in its effort to shore up the financing of the city’s over-budget and behind-schedule rail project.

Resolution 20-144[1] proposes that the county borrow up to $26 million through the sale of general obligation bonds, which would put it further on the path to exceeding the county’s debt-service limit and threaten its credit rating.

Honolulu County is already on track to breach its debt-service limit by fiscal 2026,[2] so borrowing more would put more pressure on that limit, which is set at 20% of the county operating budget, as shown in Figure 1.[3]

Meanwhile, the county also is considering borrowing more money from the federal government,[5] to deal with an estimated $130 million in decreased tax revenues caused by the state and county coronavirus lockdown measures that have devastated Hawaii’s economy.[6]

The county is clearly not in a strong position to carry more debt, yet it increased spending by 3% in its fiscal 2021 budget.[7] Honolulu’s economy will take years to fully recover from its current weak condition, so it’s unclear where the additional revenues will come from to repay any of these proposed loans.

Returning to the issue of the rail, the Honolulu Authority for Rapid Transportation is looking at easing its financing and speeding up its construction by entering into a public-private partnership. But in the end, that also might result in more debt, since taxpayers will be on the hook to pay back extra money to the private partner for any financing capital it provides.[8]

The Grassroot Institute of Hawaii recommends that rather than borrow more money, the Council should reassess the rail project and focus on reducing spending and paying off debt.

Doing so would ease pressure on the county’s budget — and on Honolulu taxpayers who are struggling to balance their own budgets.