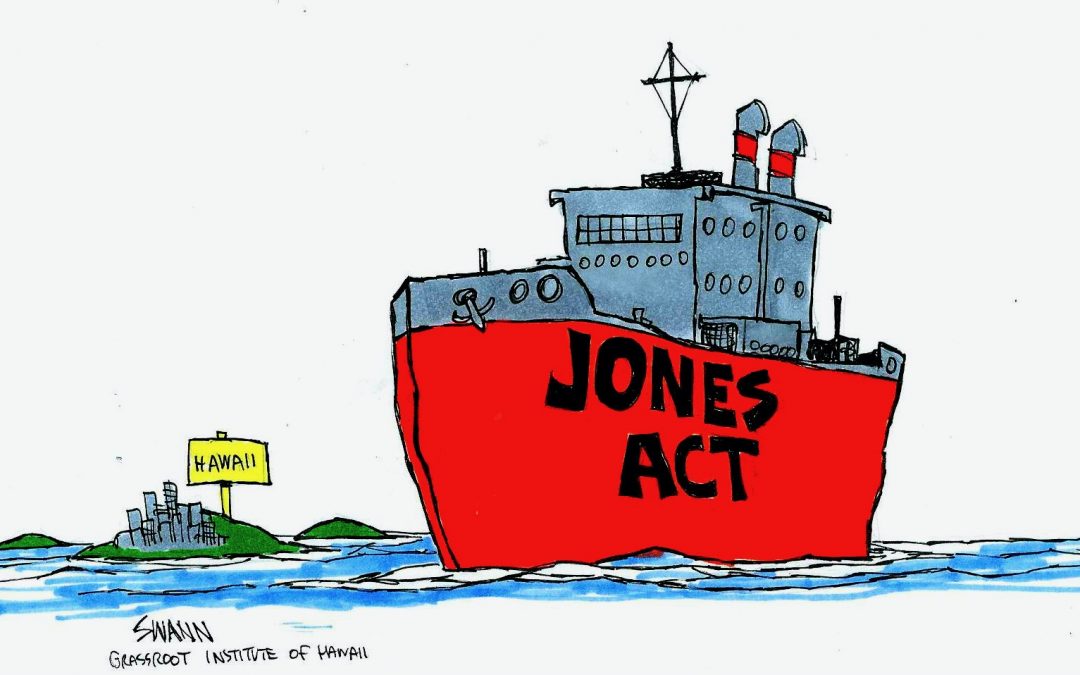 How do you know you’re starting to make a real difference on an issue? The quality of both your critics and your friends improves.

By that measure, the Grassroot Institute of Hawaii is having a banner week.

On Tuesday, the American Maritime Partnership released a study purporting to demonstrate that the Jones Act has “no effect” on prices in Hawaii. While the AMP study may not have been released solely to counter the Grassroot Institute’s own upcoming report on the costs of the Jones Act, the timing seems significant. So does the fact that the AMP report calls out the institute by name in its defense of the antiquated federal maritime law.

As for the substance of the AMP study, we could generously call it “incomplete.” The study claims that the Jones Act contributes $3.3 billion to the Hawaii economy, but doesn’t explain how it arrived at that figure. Without an explanation of the methodology, we cannot judge the accuracy of the claim. As economist John Dunham, author of the Grassroot study, explained, “Without knowing their methodology or inputs, we can’t understand the outputs. For example, does the $3.3 billion figure include economic activity that would exist despite the Jones Act, for example longshoremen? No one knows.”

The way that the AMP study determined that the Jones Act does not increase prices in Hawaii is even stranger. To arrive at this conclusion, its authors compared online retail prices of products at Target, Walmart and Costco stores in Hawaii and Los Angeles. They then concluded that groceries were only 2.4% higher in Hawaii.

Needless to say, there’s a lot more that goes into the cost of living and pricing in Hawaii than can be captured in an analysis of the websites from three national big box stores. All the AMP study managed to document was the fact that national chains enjoy the benefit of economies of scale and try to keep their prices relatively constant across markets. The AMP report also demonstrates why locals like shopping at Costco.

What it doesn’t do is capture the way that the Jones Act moves through the economy as a whole, raising the cost of living by affecting everything from construction to energy.

You don’t have to be an economist to know that the study’s methodology is faulty. You can just go to the store. That’s what one of the Grassroot Institute staffers did on Tuesday. A trip to the Keeaumoku Street Walmart showed that the online prices relied on in the AMP study didn’t necessarily reflect the in-store price. For example, an 18-ounce box of Cheerios cost $4.26 in-store versus $3.64 online and a four-pack of albacore tuna was $8.43 in-store versus $6.74 online.

So what is the Jones Act’s real cost to Hawaii families? To get the comprehensive breakdown from the Grassroot Institute study, tune in to our free webinar on July 29 at 10 a.m.

As I mentioned above, we have been very fortunate in the quality of our friends when it comes to the issue of Jones Act reform, and the best example of this can be found in the distinguished guests at our upcoming webinar. U.S. Rep. Ed Case (D-HI) and U.S. Sen. Mike Lee (R-UT) have agreed to join us to discuss the study’s findings and the future of Jones Act reform. I can’t tell you how excited we are to host this bipartisan event for the launch of our groundbreaking study.

To sign up for the webinar, visit our event page. Joining Rep. Case and Sen. Lee will be John Dunham, the author of the study. And we will be answering questions from the audience.

It is clear that Jones Act reform is becoming a hot issue, both in Hawaii and in Washington, D.C. I’m glad that the Grassroot Institute is helping lead the effort to update the Jones Act for the 21st century.