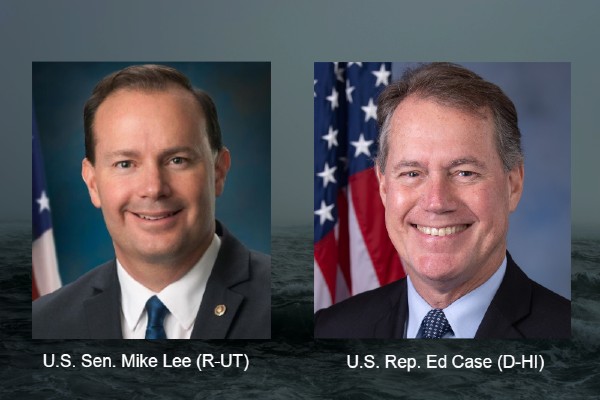 U.S. Sen. Mike Lee and U.S. Rep. Ed Case will be on hand
when the findings are presented during a live webinar July 29

HONOLULU, July 16, 2020 >> A groundbreaking new study detailing the specific cost to Hawaii of the Jones Act will be released by the Grassroot Institute of Hawaii during a live webinar Wednesday, July 29, starting at 10 a.m.

This historic event, taking place during the act’s 100th anniversary, will feature U.S. Sen. Mike Lee, Republican from Utah, and U.S. Rep. Ed Case, Democrat from Hawaii, both of whom have sponsored bills in Congress to update the protectionist federal maritime law.

Also on hand will be John Dunham, the nationally recognized economic researcher and consultant who was commissioned by the institute to conduct the study, “Quantifying the economic impact of the federal Jones Act on Hawaii.” Dunham will be available to answer any questions about the report’s methodology.

The Jones Act is a 1920 law that requires all cargo carried between U.S. ports be on ships that are U.S. flagged, built and mostly owned and crewed by Americans. It is well known that the act adds to Hawaii’s high cost of living, but what had been lacking — until now — were figures showing by how much.

Moderating the hourlong webinar will be Grassroot Institute of Hawaii President Keli‘i Akina, Ph.D., aided by the institute’s executive vice president, Joe Kent, who will field questions from the audience.

Akina will start by announcing the key findings of the 50-page report, then invite Lee and Case to remark on how those results fit with their own views of the Jones Act.

Sen. Lee’s interest in the act is highlighted by a bill he proposed in Congress last year called the Protecting Access to American Products Act. The measure would make it easier for Americans to receive flexibility from Jones Act regulations that prevent Americans from buying American.

“Unfortunately, there are some products where there are simply no Jones Act-compliant ships in existence” available to transport them, Lee said last year.

His Protecting Access to American Products Act would fix that problem, he said, by creating an expedited process for Americans to obtain a waiver. If an applicant were unable to find a Jones Act-compliant vessel that could carry a particular product, the federal government would have to approve or deny that waiver within 60 days.

Rep. Case’s interest in the Jones Act goes back to at least 2003, during his first stint in Congress, when he introduced three bills to exempt Hawaii’s livestock and agricultural industries from the act. Reelected to Congress in 2018, he again has three bills in Congress aimed at fixing what he sees as the act’s inequities.

As reported in Honolulu Civil Beat, one of the bills seeks “a straight exemption from the law for Hawaii and other non-contiguous jurisdictions.” The second would “force domestic shippers to charge a ‘reasonable rate’ that cannot be more than 10% above the fees charged by international competitors on similar routes.” The third would “rescind the Jones Act in places where there are fewer than three companies — all with separate ownership — competing for the same routes.”

His last bill is a reference to the fact that only two domestic cargo carriers are serving Hawaii: Matson and Pasha.

Case told Civil Beat that the Jones Act creates the conditions for domestic shipping companies to establish monopoly control over certain trade routes, and the only direction prices have gone in the Hawaii trade are “up, fast and repeatedly.”

The Grassroot Institute of Hawaii is an independent, nonpartisan, nonprofit research and educational organization that seeks, in the spirit of “E hana kakou!” (Let’s work together!), to educate people about the values of individual liberty, economic freedom and accountable government.