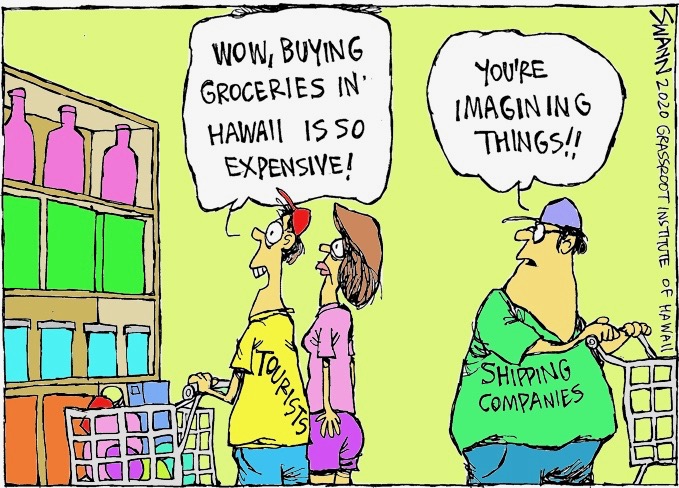 The Grassroot Institute of Hawaii analyzes the new study and finds it to be contradictory, problematic and secretive

HONOLULU, July 21, 2020 >> A new study that allegedly shows the Jones Act has no “negative impact” on the cost of living in Hawaii actually shows the opposite, according to the Grassroot Institute of Hawaii, which is releasing a Jones Act study of its own on July 29.[1]

The American Maritime Partnership said in promotional literature accompanying its new report that “recent studies and articles have questioned the value of the Jones Act to Hawaii,” and “their claims of negative impact are not supported by the facts and ignore the examples of the positive role of the Jones Act.”[2]

However, the AMP’s study itself, “Impact of the U.S. Jones Act on Hawaii,” did an online comparison of retail prices at Walmart, Target and Costco stores in Hawaii and Los Angeles and concluded that grocery prices are on average 2.4% higher in Hawaii.[3] And that’s just at island food retailers that enjoy huge economies of scale.

Keli’i Akina, president and CEO of the Grassroot Institute of Hawaii, said, “All this study manages to demonstrate is the economies of scale held by discount megastores. While it adequately explains why so many locals like to shop at Walmart and Costco, it doesn’t do much to analyze the actual costs of the Jones Act.”

“National retailers try to maintain constant pricing across markets, so of course prices can sometimes be similar for most items,” Dunham said. “But the effects of the Jones Act are much broader and are found throughout the Hawaii economy, through higher operating costs, higher construction costs and higher energy costs.”

Not only that, using online prices to compare food prices at Hawaii versus Los Angeles stores is problematic. A visit today to the Keeaumoku Street Walmart showed an 18-ounce box of Cheerios selling for $4.26, before tax, versus $3.64 for its listed online price, and a four-pack of 5-ounce cans of albacore tuna for $8.43 versus $6.74 online.

Besides groceries, the AMP study shows very small price increases for durable goods, household goods, building materials and hardware, and no increases for clothing and automobiles, while also making the case that “there are many other factors that impact the price of goods in Hawaii beyond the Jones Act.”[4]

For automobiles, the study’s metric was the national Kelley Blue Book, but one local automobile financing executive told the Grassroot Institute of Hawaii today that the “blue book” is inappropriate for determining automobile prices in Hawaii.

“A serious economic study should not compare Kelley Blue Book values,” the executive said, “because those are national estimates of the price — which is why the KBB price for a particular vehicle is the same nationwide. Instead, prices should be compared by walking into the dealership in each state.”

As for alleged benefits of the Jones Act, the AMP study states that the protectionist federal maritime law adds $3.3 billion a year to Hawaii’s economy, based on a study that has never been made public.[5]

“That study is a black box,” Akina said. “No one is allowed to see exactly how they calculate that figure. We call on AMP to release that raw data so it can be better understood.”

By contrast, he said, “Our upcoming study will be transparent with its data sources and methodology, so everyone can see how much the Jones Act costs Hawaii.”

Dunham said, “Without knowing their methodology or inputs, we can’t understand the outputs. For example, does the $3.3 billion figure include economic activity that would exist despite the Jones Act, for example longshoremen? No one knows.”

“The Grassroot Institute study will be released July 29 at a webinar featuring Democratic U.S. Rep. Ed Case of Hawaii, RepublicanU.S. Sen. Mike Lee of Utah — both supporters in Congress of Jones Act reform — and Dunham, who will be available to comment on the report’s methodology.

For more information or to arrange an interview with Keli’i Akina, please call Josh Mason at 918-261-8444 or email jmason@grassrootinstitute.org. To attend the institute’s Jones Act webinar, register here.

[1] “Quantifying the cost of the Jones Act to Hawaii,” Grassroot Institute of Hawaii, forthcoming July 29, 2020.
[2] “The Jones Act and Hawaii,” American Maritime Partnership, July 21, 2020. Among those recent studies and articles were “Cabotage Sabotage? The Curious Case of the Jones Act,” by William W. Olney of the Economic Research Center at the University of Hawaii, published in late 2019, and “Protect the nation: Reform the Jones Act,” by Keli‘i Akina, president of the Grassroot Institute of Hawaii, published in November 2019.
[3] “Impact of the U.S. Jones Act on Hawaii,” American Maritime Partnership, July 21, 2020, p.5.
[4] Ibid.
[5] The AMP study cites the January 2019 “Contributions of the Jones Act Shipping Industry to the U.S. Economy,” a private study prepared by PricewaterhouseCoopers, which in turn is mentioned as a source for the Transportation Institute’s 2019 study “The Jones Act: Driving America’s Economy,”