An arcane federal law puts Young Brothers on the ropes 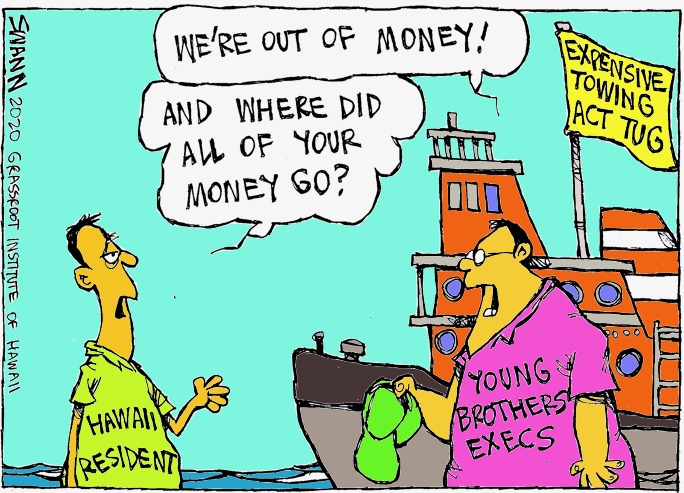 Effective Sept. 1, the increase was awarded by the state Public Utilities Commission following months of full-court press by Young Brothers, which proclaimed it was bound to go bankrupt and possibly cease service unless it received some sort of state aid. It blamed its financial woes on decreased shipping volume due to the coronavirus crisis. But there was more to it than that.

Also affecting its bottom line was the federal Towing Act of 1940, which requires any tug involved in hauling goods between American ports to be built in the U.S. Similar to the effect of the Jones Act on U.S. ocean cargo carriers, the Towing Act adds considerable capital costs to Hawaii’s interisland tug and barge operations.

Shipping expert Michael Hansen, president of the Hawaii Shippers Council, noted in July that the cost of buying U.S.-built vessels, “even for tugs and barges now, is a multiple of four or five times what it is in other countries.”

Young Brothers, he said, recently acquired four new tugboats. They were purchased in 2017 and delivered in 2019.

“They were $20 million apiece,” he said. “That’s an outrageous amount of money.”

The state Consumer Advocacy Division concurred. In testimony before the PUC in July, it said Young Brothers’ finances might have been in the black, had it not spent $80 million to buy the new tugs.

Nevertheless, Young Brothers claimed its dire situation was all about the coronavirus.

Young Brothers CEO Jay Ana told the PUC in early August that his company’s shipping volume had fallen by an average of 30% since Gov. David Ige declared the coronavirus public emergency on March 23, leaving it with a $30 million shortfall.

The company’s rich parent, Seattle-based Saltchuk Resources, Inc., inexplicably refused to come to its aid, so local Young Brothers executives went begging for either a $25 million bailout from the state or the substantial rate increase.

The latter finally was granted on Aug. 17. But don’t count on that restoring the company to good health. The nearly 50% rate hike is sure to add to the company’s demand woes. Meanwhile, its status as a virtual monopoly gives it little incentive to innovate, rate regulation gives it little incentive to cut costs, and there still is the issue of the Towing Act of 1940.

Yes, saving at least $60 million on new tugboats might not have deterred Young Brothers’ need for a rate hike, since there are many factors involved in the company’s financial management — or mismanagement, as the case may be. But bargain-bin prices for top-of-the-line tugs could have made a difference in the company’s ability to weather Hawaii’s more general financial calamity.

To avoid that scenario, Hawaii policymakers should endorse reforming the U.S.-build requirement of the Towing Act, as well as the Jones Act. And while they’re at it, maybe they also could do something about eliminating Young Brothers’ monopoly.