‘Good intentions are alone not enough’ 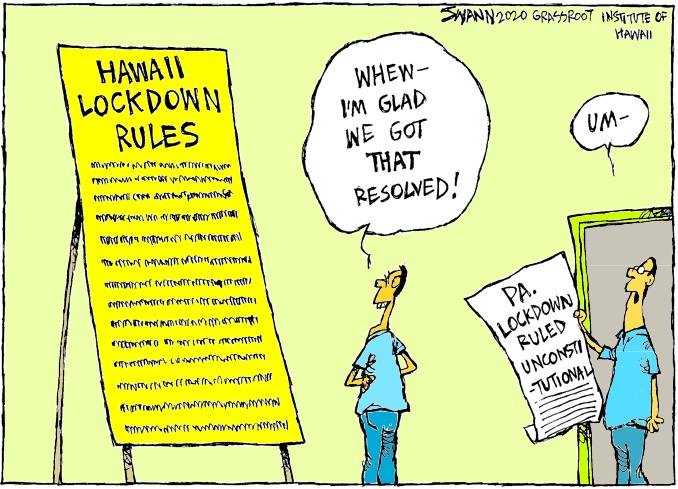 If you believe that there is something about stay-at-home orders and the closure of “nonessential” businesses that infringes upon our fundamental rights, then there is good news. A federal court in Pennsylvania has reached the same conclusion.

U.S. District Judge William Stickman IV wrote that the “good intentions” underlying Pennsylvania Gov. Tom Wolfe’s (D) anti-COVID measures — similar to the lockdown orders in Hawaii and many other states — “are not alone enough to uphold governmental action against a constitutional challenge.”

Of course, we’ve been hearing that public emergencies do not suspend our constitutional rights since the beginning of the lockdown. The difference here is what is being recognized as a protected right.

In addition to determining that caps on gatherings are a violation of the right to assembly, Judge Stickman wrote that the order closing “non-life-sustaining” businesses was overly broad, arbitrary and infringed upon the right to earn a living under the 14th Amendment.

The stay-at-home order also came under heavy criticism. Stickman wrote that it violated due process and was “such a dramatic inversion of the concept of liberty in a free society as to be nearly presumptively unconstitutional.”

But what about the fact that judges tend to defer to political leaders during an emergency? Here, the timing of the suit may have played a role. Pennsylvania officials attempted to argue for a lower standard of scrutiny based on that principle, but the judge pointed out that, after many months, the emergency could no longer be considered “temporary.” In fact, just as in Hawaii, Pennsylvania was still under an emergency status, despite being in a more “open” phase, and could revert to the lockdown at any time.

Stickman wrote: “The Constitution cannot accept the concept of a ‘new normal’ where the basic liberties of the people can be subordinated to open-ended emergency mitigation measures.”

In Hawaii, we are also living under an open-ended emergency. So how will the Pennsylvania case affect us?

Ordinarily, we would have to wait for the case to go all the way to the U.S. Supreme Court before it could possibly result in a mitigation of Gov. David Ige’s emergency orders. However, there is a group of attorneys here in the Aloha State working to change that.

On this week’s episode of my interview program “Hawaii Together,” on the ThinkTech Hawaii network, I spoke with Marc Victor and Jody Broaddus of Attorneys for Freedom. They are bringing a lawsuit challenging Hawaii’s lockdown orders on behalf of a local group called For Our Rights. The plaintiffs in the lawsuit are Hawaii residents who have been affected by the lockdown — not just in terms of their livelihoods and finances, but also their physical and mental health. They just want to be able to live their lives again.

The first goal of the lawsuit is to challenge the ability of any Hawaii governor to extend emergencies beyond 60 days. State law specifically limits emergency relief periods to only 60 days. But Gov. Ige has been extending his emergency orders again and again. In essence, we are living in a state of permanent, indefinite emergency, and for as long as that lasts, he is able to act as both executive and legislator, putting in new rules and restrictions without any say from the people or their representatives.

If successful, the Hawaii lawsuit would end the emergency proclamations at both the state and county levels. But that’s not the only goal. As Marc and Jody explained, their lawsuit is really about defending individual liberties, putting sensible and meaningful restrictions on the executive emergency powers, and finding a way to let Hawaii recover from the virus.

We’ve heard that COVID-19 presents an unprecedented challenge to our state. So why not counter that with new thinking and out-of-the-box solutions? To restart our economy, we could start with the plan outlined in the Grassroot Institute of Hawaii’s “Road map to prosperity.” But we also need to reconsider the state emergency powers law and how it might infringe on personal liberty.

An emergency is one thing, but we should also be on the lookout for a “new normal” that eats away at our rights.