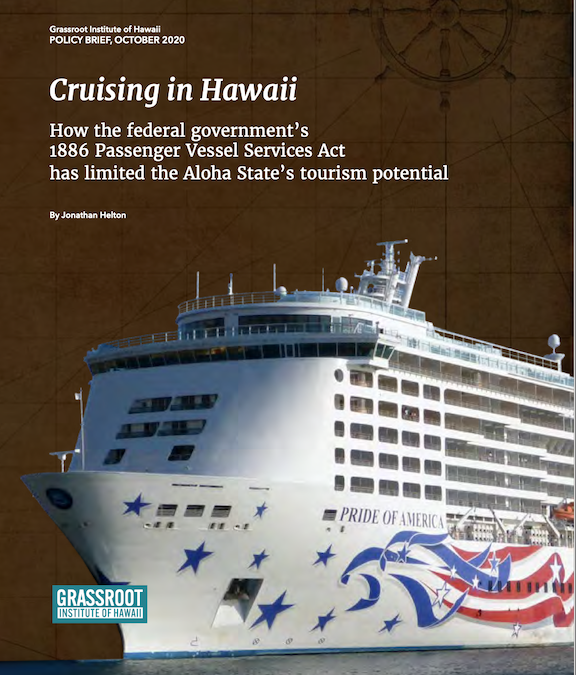 Ocean cruising has been suspended during the lockdowns,
but when it resumes, it needs more freedom to benefit Hawaii

HONOLULU, Oct. 21, 2020 >> Ocean cruising is a natural for Hawaii’s tourism industry, but federal law has held it back for more than a century, according to a new policy report from the Grassroot Institute of Hawaii.

The report, “Cruising in Hawaii,” reviews the history of the federal 1886 Passenger Vessel Services Act, including its relationship to Hawaii, and concludes that changes are needed if tourism in the Aloha State is to reach its full diversified potential.

The report acknowledges that the ocean cruise industry has been on pause since early this year because of the worldwide coronavirus lockdowns. But eventually, the industry will get back to business, including in Hawaii. And when it does, the PVSA will be limiting how much Hawaii can benefit.

That’s because the PVSA requires that vessels carrying passengers between U.S. ports be U.S. flagged, U.S. built and mostly owned and crewed by Americans.

It is similar to the protectionist federal maritime law of 1920 known as the Jones Act, which applies to merchandise and also limits Hawaii’s economic potential. A recent groundbreaking study by the Grassroot Institute of Hawaii found that the Jones Act costs Hawaii about $1.5 billion a year, including about $1,800 per average family and about 9,100 lost jobs.

The institute’s new report does not quantify the economic cost of the PVSA to Hawaii, except to suggest that with a little encouragement, the ocean cruise industry could become a viable and thriving component of Hawaii’s tourism sector, “generating thousands of jobs for isle residents and millions of dollars in revenues for businesses and government tax coffers.”

It discusses how a PVSA exemption benefited Puerto Rico, and cites research speculating on the benefits of PVSA reform generally, including a 2009 study by University of Hawaii economist James Mak that called for outright repeal of the act.

The main contribution of “Cruising in Hawaii” is in effectively demonstrating why, “Even before the COVID-19 outbreak of early 2020, luxury cruise ships were uncommon in Hawaii waters.”

Helton explains, “Foreign cruise liners are allowed to pick up passengers at a Hawaii port and cruise in Hawaii waters, but their passengers may not go ashore until they are returned to the ports from which they started, unless their ships also stop at a faraway foreign port such as Fanning Island, 1,000 miles south of Hawaii. A cruise liner attempting to make such a voyage in violation of the PVSA requirements can be fined $798 per passenger.”

For Hawaii to benefit more from the ocean cruise industry,” the report says, “the PVSA would need to be repealed or reformed.”

As with the Jones Act, one reform could be to remove the U.S.-build requirement.

“If U.S. companies did not have to buy more expensive U.S.-built ships,” the report says, “that would lower upfront capital costs and conceivably encourage more companies to enter the market.”

Significantly, no bluewater ocean-going cruise ships have been built in America for over 60 years, and even the ironically named Pride of America is technically a foreign-built ship that required a PVSA exemption pushed through Congress by U.S. Sen. Daniel Inouye.

The report says allowing U.S. cruise line companies to buy less expensive modern vessels in the open market could bolster the cruise industry, “though only full repeal — allowing foreign-owned and foreign-flagged companies to carry passengers between U.S. ports at will — would more fully serve the goal of open competition and greater prosperity for Hawaii’s economy.”

Of Hawaii’s current congressional delegation, only U.S. Rep. Ed Case, who has three bills in Congress intended to reform the Jones Act, has said he would consider making changes to the PVSA.

To read or download a copy of the full report, please go to www.grassrootinstitue.org.