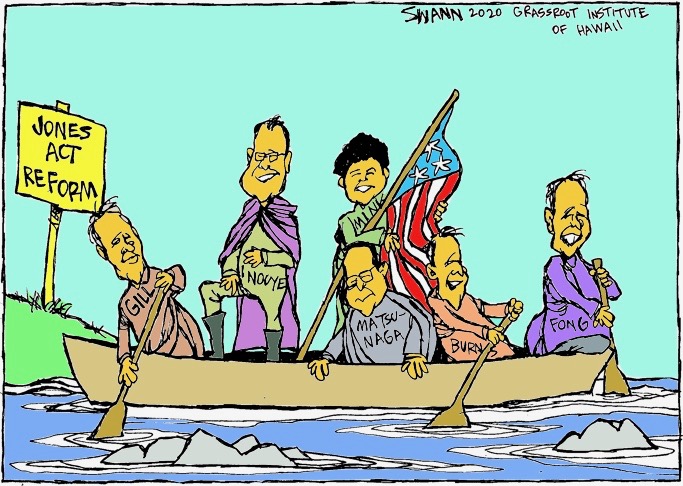 THESE DAYS it is almost a rite of passage for Hawaii politicians to claim support for the Jones Act, that 100-year-old federal shipping law that restricts cargo transport between U.S. ports and adds to our cost of living. But supporting Jones Act reform also was once in fashion, with Hawaii’s legendary U.S. Sen. Daniel Inouye, no less, taking a lead role.

In 1967, the reform leaders were Inouye, a Democrat, and Republican U.S. Sen. Hiram Fong, also from Hawaii. Together with U.S. Sen. Ernest Gruening of Alaska, a Democrat, they sought an exemption for Hawaii and Alaska from the portion of the 1920 law that requires vessels engaged in domestic commerce to be built in the U.S.

Other requirements of the protectionist Jones Act are that the U.S.-built vessels be U.S. flagged and mostly owned and crewed by Americans.

Research shows that America’s noncontiguous states and territories, such as Alaska and Hawaii, bear extra costs because of the Jones Act, since they are almost wholly dependent on waterborne imports.[2] Those costs include lost opportunities, which Inouye, Fong and Gruening were trying to address with their Senate Bill 2454.

The same bill, Gruening told the U.S. Senate, had been introduced “by all Alaska and Hawaii delegations in the House of Representatives”[3] — namely Democrats Spark Matsunaga and Patsy Mink of Hawaii and Republican Howard Pollock of Alaska — and sought to permit “a very desirable trade relationship between the 49th and 50th states — Alaska and Hawaii.”

As Gruening explained it, “The benefit of mutual trade for both states is now, unhappily, hindered by the existence of unnecessary high water transportation costs resulting from necessary dependence on American-built ships. The advantage to both states available from utilization of foreign carriers plying the Pacific with cargo exchanged between the United States and countries of the Far East are so great we must act to remove barriers to this now existing.”

Gruening cited the construction of a liquified natural gas terminal in Alaska that would be used for exports to Japan using Swedish-built ships. If Hawaii could access these lower-cost vessels, he said, it also could “enjoy the benefits of low-cost natural gas produced in Alaska.”[4]

He further mentioned “another new plant, now well under construction, to produce chemical products, including urea and anhydrous ammonia for fertilizer, [which] could also be the source of reciprocal benefits for Alaska and Hawaii.”

“Hawaii’s agricultural economy needs these products,” he said, “and could buy them at less cost than is now possible — again if we change the cabotage laws [the Jones Act] to allow the use of low-cost shipping.”[5]

The Honolulu Advertiser quoted Gruening as saying, “Hawaii needs the mineral, timber and fuel resources abundant in Alaska and lacking in Hawaii, while Alaska could be the beneficiary of fruits, vegetables and other products of Hawaii. How ironical that [an] oriental country can receive an American product at a far lower price than an American area, especially one that lies nearer the source of supply than are the Asian countries.”[6]

“Building materials might be cheaper here if the law were changed,” he told the Honolulu Star-Bulletin. “But I wouldn’t want to bet too much on fruit and vegetables; they could be handled better by air freight.”[7]

In any case, the bill failed.

IN 1970, INOUYE again cosponsored a bill to amend the Jones Act, this time with Democratic U.S. Sen. Mike Gravel, Gruening’s successor. It mirrored the earlier proposal and was offered, Gravel said, “in anticipation of marine cargo traffic that might move between these two states in the future.”[8]

Hawaii’s then-governor, Democrat John Burns, supported the measure. At a shipping conference in Washington, D.C., he said America’s maritime laws were discouraging Hawaii from developing its tremendous potential as a Pacific trade and transshipment center.[9]

At the same conference, Mink concurred. The problems caused by the Jones Act, she said, “too often have been swept under the rug by policymakers and others,” and she wanted “to remove an obstacle that had demonstrably impeded my state’s growth and development.”[10]

Mink clarified that she generally supported the Jones Act, but believed there could be exceptions: “Only where the act serves not to protect American jobs but to deny employment to American workers would I consider a change, but that is exactly what is happening in Alaska and Hawaii today.”

Again, however, despite bipartisan support — and even with support from members of Congress who otherwise supported the Jones Act — the reform effort eventually died.

Years later, in 2003, Inouye — now Hawaii’s senior U.S. senator — again sought an exemption from the U.S.-build requirement, this time regarding the Passenger Vessel Services Act of 1886, which is just like the Jones Act except that it applies to passengers, not merchandise.

His intent was to enable three foreign-built cruise ships, including the ironically named Pride of America, to sail in Hawaii waters. And this time he was successful. The move resulted in lower fares and almost a tripling of cruise passengers over the next three years.[11]

Other reformers from the ‘60s and ‘70s remained steadfast. During his bid for the Democratic presidential nomination in 2019, former Sen. Gravel wrote in Pal Item that “The Jones Act is regressive and hurtful to outlying regions of the U.S. and Congress should repeal it immediately.”[12] He urged a waiver from the act until reforms could be accomplished.

Inouye, of course, is no longer with us; neither are Fong, Mink, Matsunaga, Burns or Gill. These days, Hawaii’s current congressional delegation — with the exception of U.S. Rep. Ed Case — march lockstep in support of the Jones Act, unwilling, it seems, to consider any new evidence regarding how much the law harms the people of Hawaii.[13]

Case actually has several bills in Congress aimed at reforming the act, as does U.S. Sen. Mike Lee, a Republican from Utah. Both Case and Lee participated recently in a webinar sponsored by the Grassroot Institute of Hawaii on why Jones Act reform should appeal to members of both of the main political parties.[14]

[13] “Quantifying the cost of the Jones Act to Hawaii,” John Dunham & Associates, for the Grassroot Institute of Hawaii, July 28, 2020; and William W. Olney, “Cabotage or Sabotage? The Curious Case of the Jones Act,” University of Hawaii Department of Economics Working Paper Series, June 2020.