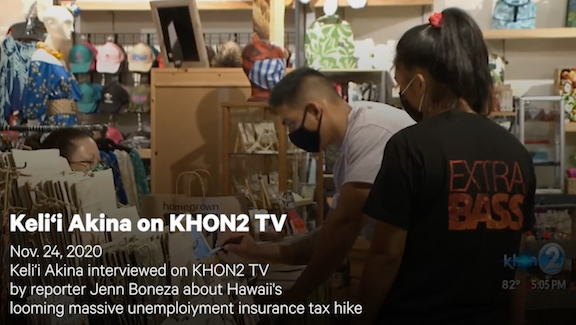 KHON2 TV reporter Jenn Boneza interviewed Grassroot Institute President Keli’I Akina for a news story that was aired at least three times on Tuesday (Nov. 24) about how Hawaii’s unemployment insurance tax is going to automatically triple in the new year, unless action is taken to prevent it.

“A restaurant, or perhaps a small retail shop, with 10 employees, they’re paying now about $5,500 to $6,000 a year for their unemployment tax,” Akina said. “Next year, they’re going to pay automatically at least $18,000. That’s a threefold increase.”

And that, Boneza said, could have drastic consequences.

Also interviewed for the story were Anne Perreira-Eustaquio, director of the state Department of Labor and Industrial Relations, and state Rep. Sylvia Luke, chair of the House Finance Committee.

Female announcer: Businesses could end up paying up to three times more in unemployment taxes come January. It’s something many worry will force more businesses to close. Jenn Boneza reports.

Jenn Boneza: The unemployment trust fund, which is used to pay out unemployment benefits, is empty. In fact, it’s hundreds of millions of dollars in the red. If legislators don’t act quickly, employers will be faced to pay nearly three times what they currently do in unemployment taxes.

The unemployment rate peaked in April at 23.8%. It’s now about half that. The money used to pay all those unemployment checks is paid by businesses.

Anne Perreira-Eustaquio: The unemployment tax is fully funded by employers in the state. Employers are the ones who pay into the trust fund.

Boneza: Perreira-Eustaquio says the fund was depleted, and the state now owes millions.

Perreira-Eustaquio: So far, we’ve borrowed about $695 million from the federal government. By the end of December, we estimate to borrow about $1 billion to $1.2 billion in money to cover payments to individuals who are unemployed here in Hawaii.

Boneza: That could have drastic consequences.

Boneza: It could also force more businesses to close for good. There are two ways to solve the problem. The first: Put unused CARES Act funds into the unemployment fund. The second is for the Legislature to step in.

Sylvia Luke: We’re very concerned about that, so when we return in January, we will definitely take a look at adjusting the schedule and setting at a level that will not be punitive.

Boneza: Perreira-Eustaquio tells me that the last time the state depleted its unemployment funds was in 2010, following the recession of 2008.