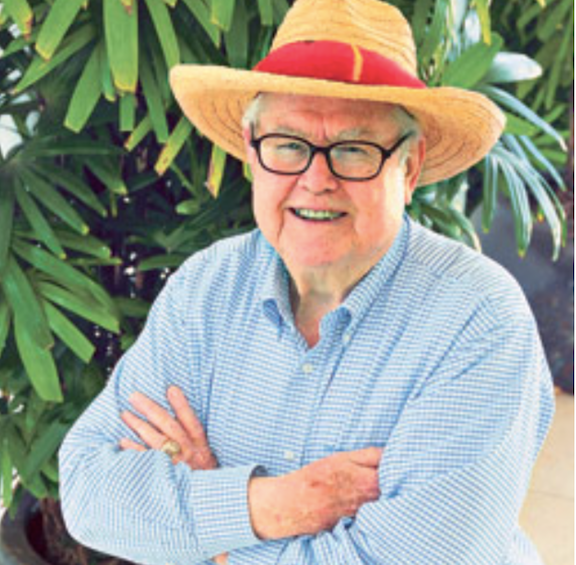 Photo by Craig T. Kojima, courtesy of the Honolulu Star-Advertiser

HONOLULU, Nov. 28, 2020 >> One of Hawaii’s truly “happy warriors” in the world of politics and ideas, Richard “Dick” Rowland,” founder and chairman emeritus of the Grassroot Institute of Hawaii, died today in Russellville, Alabama, at age 90.

Surrounded by family, he succumbed early this morning to complications from cancer.

Said Robin Stueber, Grassroot Institute chairman: “We’ve lost one of the bravest and most courageous fighters for liberty. He worked to the very end passing on his optimism and belief in the power of each person to create their own destiny.”

Said Keli’i Akina, Grassroot Institute president and CEO: “Dick Rowland was an inspiring leader whose life advanced the cause of liberty in Hawaii and across the world. I will always be grateful to him as a role model, mentor and friend.”

Rowland’s daughter Connie Cleere Cole shared that he was very comfortable at the end, and he had listened to every voicemail left on his phone. Daughter Linda Zimmerhanzel added that “he was his vibrant, enterprising self until the last week — running the Franklin County Census efforts and taking his three-mile walks every day the weather allowed.”

Connie said her father had become well-known in Russellville through his work as senior coordinator for the Franklin County Census Committee for the State of Alabama, even though he moved there just three years ago to be with family.

Originally from Texas, Rowland moved to Hawaii in 1971 when he was still in the U.S. Army. He retired as a colonel four years later, then worked 26 years as an insurance salesman with Northwestern Mutual, before retiring to start the Grassroot Institute of Hawaii. His goal was to educate isle residents about individual liberty, the free market and limited government. He was then 71 years old.

Just a few days ago, in his weekly “President’s Corner” column, Akina recalled that Rowland’s philosophy is why the institute’s name is “Grassroot,” not “Grassroots.” It was Rowland’s belief, Akina said, that “real change starts with the individual. In his words, ‘If liberty is to be, it is up to me!'”

Another popular Rowland aphorism is, “The bigger government gets, the smaller you get.”

Rowland also always encouraged people to have an “attitude of gratitude.”

Said Akina: “We at the Grassroot Institute of Hawaii will always be grateful for Dick Rowland’s plain-spoken wisdom, his intellect, his humor, his compassion and his warmth. We already miss him dearly, but he will always be in our hearts. We extend our deepest condolences to his family. They can take heart knowing that so many people think the world of Dick Rowland.”

Besides his daughters Connie and Linda, Rowland is survived by third daughter Michelle Sanoske, nine grandchildren, seven great-grand children and one great-great grandchild.