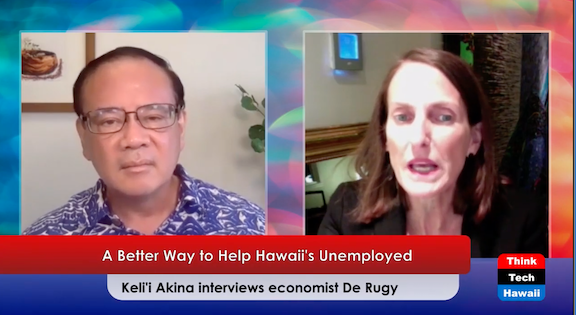 Hawaii’s unemployment insurance system is in crisis, with stalled payments, rampant fraud and massive debt leading to higher taxes. Is there a better way to help the unemployed — and Hawaii’s businesses that pay the taxes?

Yes, says international economist Veronique de Rugy, a senior research fellow at the Mercatus Center at George Mason University and a nationally syndicated columnist. who on Dec. 7, 2020, was the featured guest on Keli’i Akina’s “Hawaii Together” program on the ThinkTech Hawaii network,

In the interview, de Rugy told Akina, president of the Grassroot Institute of Hawaii, that rather than triple Hawaii’s unemployment insurance tax rate to compensate for the fund’s deficit, “What I would favor is to just dismantle the whole system … and move to … a system of private accounts.”

That would be politically difficult, she acknowledged, but said such systems have been adopted successfully throughout the world. Each is little different, but the principle is the same: The employer and employee each pay into a fund that ultimately belongs to the employee, who would have an incentive to not deplete it. It also would be portable, and available on retirement, if not already used. De Rugy speculated that private insurance companies would emerge to cover people who work for themselves, as they already have for Uber drivers and other similar independent contractors.

A helpful article for background is one she wrote for the Mercatus Institute in April, 2020, “A Timely Redux for Personal Unemployment Insurance Savings Accounts,” in which she proposed specific policy reforms to deal with the flaws in the current unemployment insurance system.

Meanwhile, you can listen to the interview below to hear more about it, or read the full transcript that follows.

De Rugy’s primary research interests include the U.S. economy, the federal budget, taxation, tax competition and financial privacy. She has testified numerous times in front of Congress on the effects of fiscal stimulus, debt and deficits, and regulation on the economy.