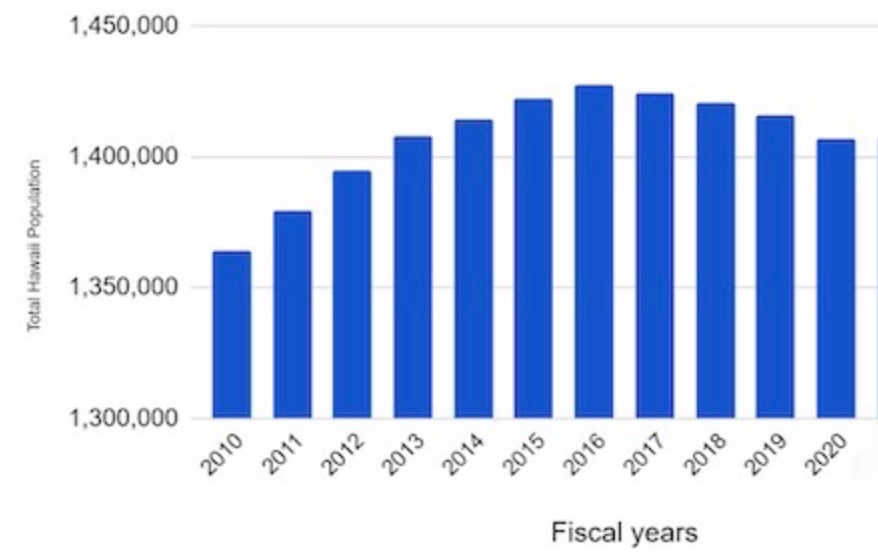 HONOLULU, Dec. 22, 2020 >> Hawaii’s economic crisis has precipitated the third-fastest level of economic flight per capita in the nation, behind Illinois, and followed by West Virginia, Mississippi and Alaska, according to the Grassroot Institute of Hawaii.

U.S. Census Bureau data released today shows Hawaii’s population declined in fiscal 2020 by 8,609, which is more than the previous year, when the state suffered a net population loss of 7,487.

“This isn’t a new problem for our state,” said Keli’i Akina, president and CEO of the Grassroot Institute of Hawaii. “For some time now, our neighbors, family and friends have been moving away to states such as Idaho, Arizona, Nevada, Utah and Texas, which have lower taxes and fewer regulations, and offer residents more freedoms and opportunities.

“As we’ve documented in our ‘Why we left Hawaii’ series,” he said, “there’s no mystery about why they feel compelled to go: It’s a matter of the state’s high cost of living and better job opportunities in other states.”

This is the fourth consecutive year of negative growth for the state, reflecting a consistent trend of residents leaving Hawaii for better economic opportunities elsewhere. However, this year’s drop of 8,609 residents was five times as much as the Economic Research Organization at the University of Hawaii (UHERO) projected earlier this month. It was also equal to the number of people UHERO expected Hawaii to lose by the end of fiscal 2021.

The state Department of Business, Economic Development and Tourism was more accurate in its predictions. It estimated a decrease of 0.1% in 2020; the actual decrease was 0.13%. For fiscal 2021, DBEDT is actually projecting an increase of 0.1%, then further increases of 0.3% in each of the following two years.

Meanwhile, the trend is downward, which Akina said has accelerated because of the coronavirus lockdowns.

“Hawaii’s unemployment numbers are among the worst in the nation,” he said. “The state and county lockdowns have hit the state especially hard. Given such bleak economic prospects, it’s no surprise that residents are leaving the state quicker than ever.

“Hawaii’s policymakers cannot ignore the warning posed by the increased number of people leaving the state. Not only does it represent a loss of state revenue that will deepen our budget problems, it also means the loss of vital workers and professionals.

“The people of Hawaii are our greatest resource,” Akina said, “and we must work to make the state a more competitive place to live through policies that will reduce the cost of living and improve the economy.”