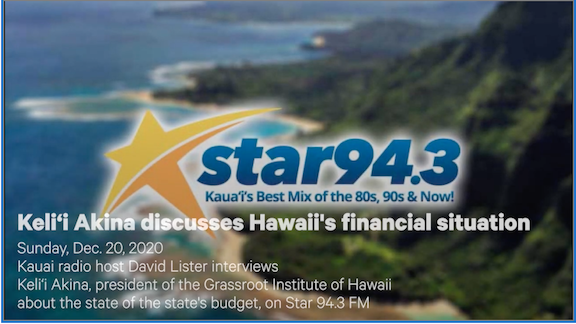 Akina, president of the Grassroot Institute of Hawaii, called it “one of the worst financial crises the state has ever faced,” and suggested steps state officials could take to turn things around.

A full transcript of the interview is below.

David Lister: The Whispers on Star 94.3, Dave Lister, Sunday afternoon. On the phone with me now is Dr. Keli’i Akina. He’s the president and CEO of Grassroot Institute, Hawaii, and good afternoon to you, Doctor.

Keli’i Akina: Good afternoon, Dave, just delighted to be with you and your listeners today.

Lister: We asked you to come on the show because we want to give an illustration. Just how bad is the state financial situation?

Akina: Dave, we are going through one of the worst financial crises the state has ever faced. The state is facing $1.4 billion in shortfall for each of the next four years. What that means is that we’re going to be missing more than 20% of our budget.

Akina: Probably the most infamous thing is that he’s planning to furlough state workers, and that means they will get two days per month off without pay. He’s also looking at cutting programs, and that means layoffs as well.

For the first time in history, Gov. Ige is planning to borrow hundreds of millions of dollars just to pay salaries and operating costs. We’re going to go into the hole even more deeply just to try to stay afloat.

Lister: We’ll come back and talk about some possible solutions. There’s always a better song playing on Star 94.3. Dave Lister, talking with Dr. Akina from the Grassroot Institute, Hawaii. Doctor, we were talking about this shortfall coming up for the state. I mean, $1.4 billion is a lot of money. Why is the budget so far in the red?

Akina: Dave, that’s easy to see for anyone who balances a household budget. It’s basically that the state spends too much money. Over the last decade, the state has spent $1.4 billion over the limit that is set by our state Constitution. That limit is in place to make sure that we save enough money for a rainy day. Now the rainy day is here. In fact, it’s a stormy day, and the money is gone.

Lister: It’s mind-boggling. What are the legislators doing about it?

Akina: They’re talking about a lot of possibilities. Some lawmakers are planning to increase our taxes, but that could hurt Hawaii’s struggling economy even more. We think lawmakers should keep their hands off taxes at this time. Remember that Hawaii’s unemployment taxes are already set to triple next year. We’re really going to give businesses a black eye if we increase taxes. They’re already struggling, and we don’t want to kick them while they’re down.

Lister: We’re talking with Dr. Akina from the Grassroot Institute, Hawaii. What should the governor do to balance the budget? We’ve all got to work together on this, and it just seems to me that there always seems to be some type impasse.

Akina: There’s no easy way to balance the budget. It’s painful to reduce spending, but it has to be done. We absolutely sympathize with our state workers who will have to go on furlough, but it doesn’t help state workers if their government falls apart and can’t meet basic needs.

One of the things the lawmakers should do is remember to save money during the good times to prepare for the bad times. We basically need to spend less and save more. That’s an easy solution, but it’ll take a while to implement.

Lister: We know that allowing that monorail system to go over budget by $1 billion is just unacceptable. We need to keep an eye on all this stuff, and we appreciate all your efforts there at Grassroot Institute, Doctor.

Akina: Thank you, and if anybody wants a roadmap, we’ve got a “Roadmap to Prosperity” with 23 solutions to get our government on even keel. It’s at grassrootinstitute.org. Thanks so much for letting me be with you, Dave.

Lister: Doctor, thank you. Check that website out. Stay informed.