Perry ponders ‘Lockdown Versus Liberty’ — and hat-tips our cartoonist 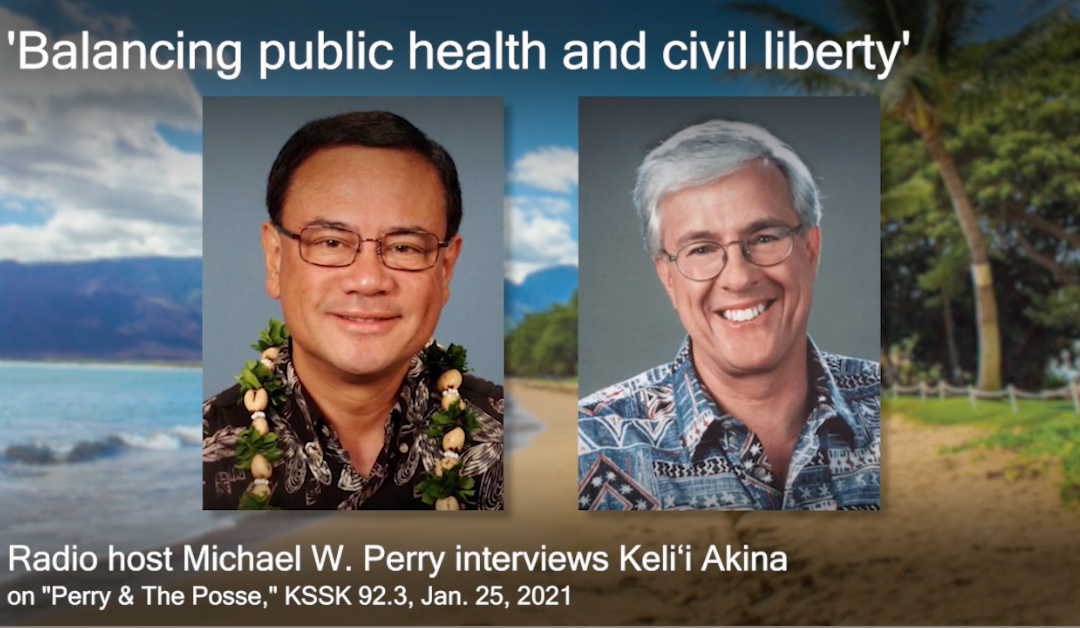 The brief explains why Hawaii’s Legislature needs to revise the state’s emergency powers law, to prevent the governor’s extended exercise of unilateral power, such as we have experienced in Hawaii since March 2020.

A transcript of the 7-1/2 minute conversation is below.

Michael W. Perry: We were talking about lockdowns a little while ago. The COVID-19 shutdown all over the country, all over the world, have basically been a disaster. We keep doing the research papers for you here, the studies that show there is just not any significant difference between places that lockdown and their success with the virus and places that don’t. It’s pretty amazing.

You know who likes the shutdowns? They did a survey … People who like it [are] people in cities with graduate degrees and high incomes. Those are the people doing very well. The rest of us, not so much.

Look, on the phone is Keli’i Akina. Dr. Akina runs the Grassroot Institute. He and the gang over there have been following this whole lockdown thing. … Keli’i, welcome to the show, by the way. Thank you for being here.

Keli’i Akina: Glad to be here, Mike, with you and The Posse.

Michael: Politicians have oversold the benefit of the lockdowns without a whole lot of science, and they’ve downplayed the consequences, and the consequences are going to hurt us for years. The bad effects on health care, mortality, economic, personal well-being; they’re doing all kinds of research right now. The spoiler: it’s not good. What we’re looking forward to here is not good at all.

Then, comes the constitutional questions about the emergency-management laws. Wait a minute, did we overstep our authority here on the part of some politicians? Dr. Akina and the Grassroot Institute of Hawaii people have been looking at this, the constitutional part of this. You even have something called “Lockdowns Versus Liberty,” That’s your new white paper over there at the institute. What’s that all about?

Keli’i: Well, first of all, Mike, we’re not criticizing the governor or the mayors for taking important actions to safeguard public health. That’s important. But we are asking the hard questions about the loss of our civil liberties. In our paper, “Lockdowns Versus Liberty,” which anyone can get at grassrootinstitute.org, we ask, “When does the government go too far in restricting our constitutional rights?”

People are concerned about the practical and economic consequences, and there’s also the loss of freedom, lack of transparency, lack of balance of power, with the governor acting as a ruler through emergency proclamations. Basically, our report asks whether there’s a better way to handle emergencies in the future, a way that safeguards liberties while still preserving public health.

Michael: Great idea. Now, this report, “Lockdowns Versus Liberty,” looks at going to court because that’s happened all over the country, right? People have gone to court to challenge lockdowns, but the courts have pretty much washed their hands. Why?

Keli’i: The courts tend to give the government a lot of leeway in the case of an emergency. It’s often years or decades later that they address the civil liberties issues because the crisis is most urgent. Most cases challenging the lockdowns have failed, especially early on. There’s been some success in New York and Pennsylvania, but it’s not clear what that means for Hawaii.

What we really need is not the courts, but we need for the Legislature to change the law. For example, the law says emergency proclamations are supposed to expire in 60 days, but the governor just keeps issuing new proclamations one after another. That loophole in the law has to be fixed.

Michael: Yeah, I remember. We wanted to lockdown for two weeks to flatten the curve. Now, that was 10 and a half months ago. That has been a very long two-week lockdown. It doesn’t look like they’re going to stop anytime soon either. We still have, for reasons that escape us, no school in places and no school sports, where the rest of the world is having great success with all of those things. What’s the solution from Grassroot Institute? What do you propose?

Keli’i: At the bottom line, go back to what it is to be America. We need to restore the balance of powers between the governor and the Lewgislature so that the people have a greater say in how emergencies are handled.

Specifically, reform Hawaii’s emergency-management statute. Make it so that the legislature must approve any extension of an emergency period past 30 days. And the Legislature should also be able to end an emergency at any time by concurrent resolution. We should also require that restrictions and regulations be narrowly tailored so that there’s a clear connection between the restriction and public health aim. For example, when we were prohibited from walking in parks, there was no clear connection to any health rationale for that.

Michael: Great, maybe bring the Legislature. Will they have the cojones to take care of that, do you think?

Keliʻi: Well, you know, that’s up to us as people to get on the phones and get down there to the Legislature through our email and so forth and let our leaders know exactly what we want. Legislators respond to pressure from the people, and I think more of us need to get involved in saying how these emergencies should be handled.

Michael: By the way, don’t even get Keliʻi started on the budget. We could do an entire … As a matter of fact, we have to do that. How about coming back next week? Let’s talk about money, the money we don’t have. OK?

Keliʻi: Glad to do it, but sad to do it at the same time.

Michael: No kidding. You were able to get one of my favorite cartoonists, David Swann, used to be with the newspaper, and he is now working — I guess, the newspaper can’t afford to do cartoonists anymore. I’ve always liked his drawings, I’ve always liked his cartoons, and you got him, somehow, at the Grassroot Institute. We love his new one. Jimmy, is it up on the website already?

Michael: You can always go to grassrootinstitute.org and look at all the past ones, but the new one is about the state cutting and how they’re unable to find anything to cut. You’ll love this. Congratulations for getting a hold of David Swann.

Keliʻi: Thank you. David takes our dry charts and research papers and gives life to them. I think people will love those cartoons.

Michael: He really does. I’ve always admired cartoonists who can put it into one frame with just a few words and a drawing, and he does very well.

Dr. Akina, thank you very much. We’ll talk about budgeting and the money we don’t have at another time. One more time, the website.