Kent to Maui Council: ‘This is increasing hurdles to housing’ 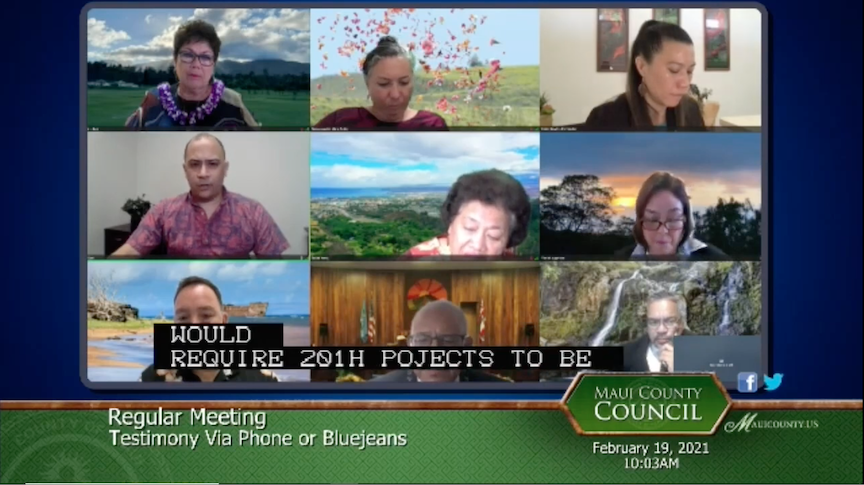 The video below features Joe Kent, executive vice president of the Grassroot Institute of Hawaii, presenting testimony on Feb. 19, 2021, to the Maui County Council regarding a proposal to increase the county’s affordable housing requirement from 50% to 75%.

His message, basically, was that “the policy intended to generate more affordable housing will actually do the opposite: It will slow the growth of housing and spur the development of high-end housing,”

“For that reason,” he said, “we urge you to shelve any proposal that would increase the cost of housing in the islands, such as this one. Instead, we urge you to consider reform options listed in our report, ‘How to Build Affordable Thriving Neighborhoods.’“

Speaker 1: The next person we have signed up to testify is Joe Kent, to be followed by Paul Deslauriers.

Joe Kent: Morning. Can you hear me?

Kent: Aloha, Chair Lee and council members. My name is Joe Kent, and I’m the executive vice president of the nonprofit Grassroot Institute of Hawaii. I’m also a paid lobbyist representing our nonprofit. Our mission is to educate about individual liberty, economic freedom and accountable government.

We’re offering comments on CR21-1, a bill that would require 201H projects to be 75% affordable. We believe this bill is well-intended, but we’re concerned that it may actually have the opposite effect and slow the growth of housing and encourage the development of high-end housing like mansions.

We looked at a 2020 survey of over 1,000 municipalities across the US, and saw that only three had affordable housing requirements higher than 75%. Those are Santa Paula, California; Oxnard, California; and Aquinnah, Massachusetts. All three require 100% affordable housing, and all saw housing growth decline by more than 60% during the decade after the policy was adopted.

For that reason, we urge you to shelve any proposal that would increase the cost of housing in the islands, such as this one. Instead, we urge you to consider reform options listed in our report, “How to Build Affordable Thriving Neighborhoods.” That’s included in my written testimony. I wasn’t able to submit it, so perhaps I can submit it another time. …

Lee: Thank you. Did Ms. Paulson have her hand up?

Ms. Paulson: I saw yours first. One of you please go forward.

Lee: Thank you. Mr. Kent, can you please submit your testimony as well as the report? We would love to … Thank you.

Kent: Yes. I have a lot more data in my testimony too, including the 1,000 municipalities and their affordable housing requirements and statistics. I’m not sure who I emailed to do that, though. I apologize.

Sugimura: No. But can the clerk give him the address to send the testimony to?

Lee: Sure. James, could you send that information to Mr. Kent? …

James: Yes. We can send that. We can private-message him in the meeting chat. Thank you.

Lee: We have one more question for you from Ms Paltin.

Tamara Paltin: Thank you, Chair. Thank you, Mr. Kent, for your testimony today. I was wondering if you could clarify for us how this bill would spur more luxury housing. I mean more so than it already has been spurred by all the luxury housing coming up right now.

Kent: Sure. Let’s say you have one acre to build a low-rise apartment building, and 75% has to go to below-market rates. That means the 25% have to be priced at such a rate that it would recoup that cost. So now you have to find someone who’s going to pay lots more money than it’s worth to live in a low-rise apartment building. It’s hard to find those clients, and rather than go through that rigmarole, it’s sometimes easier to just build the mansion. In that respect, we feel that this may actually have the unintended consequence.

Paltin: OK, so you don’t have any proof or studies, or anything, it’s just a feeling of an unintended consequence?

Kent: No, no, no, no. We have studies on that. We have a report that we’ve written about the housing regulations in Hawaii and across the nation, we’ve compared them. The report is called “How to Build Affordable, Thriving Neighborhoods.” We can send that to you.

Paltin: To clarify, when you say “We’ve written,” you are speaking about?

Kent: The Grassroot Institute of Hawaii.

Paltin: Are you a paid member of that organization?

Lee: I see Mr. Sinenci has a question.

Shane Sinenci: Thank you, Chair. Just clarification. Which was the nonprofit, Mr. Kent?

Kent: The nonprofit is called the Grassroot Institute of Hawaii.

Mike Molina: Thank you, Madam Chair. Good morning Mr Kent. Thank you for sharing a much more balanced perspective of the legislation.

In your testimony, I guess you mentioned a concern that it could, I guess, disincentivize developers from doing affordable housing projects. But as it is right now, as I mentioned to an earlier testifier, we already have four projects that are ready to go, one at 65%, another one at 100%. So I’m having a hard time seeing how this legislation could deter developers, because it seems like they’re open to it. Plus, as you know, with this fast-track process, they’re getting considerable cost-benefits: exemptions and waiver fees. So … your membership, is it made up of developers in the Grassroot Institute or other business folks?

Kent: No, we testify on all measures concerning regulation. We often advocate for lower regulation and lower taxes, and more government accountability. We often speak on the housing issue.

There may be those projects that make it through, such as the ones you mentioned, but often, the only way to make those pencil out is through government subsidies, so that puts a burden on the taxpayer then. We’re just bringing that up.

Molina: Mr. Kent, the developer can pass those costs off to the market rate homes too, right, to pencil it out?

Kent: That’s correct. Maybe I didn’t explain it correctly. Basically, I’m trying to say that if the percentage of market rate homes is smaller, and that has to cover the cost of the affordable homes, it’s hard to find someone who’s going to pay millions and millions of dollars to live in a low-rise apartment building. If you’re a developer that has one acre to build, that’s the dilemma you’re faced with.

Lee: Any more questions? If not, thank you, Mr Kent.