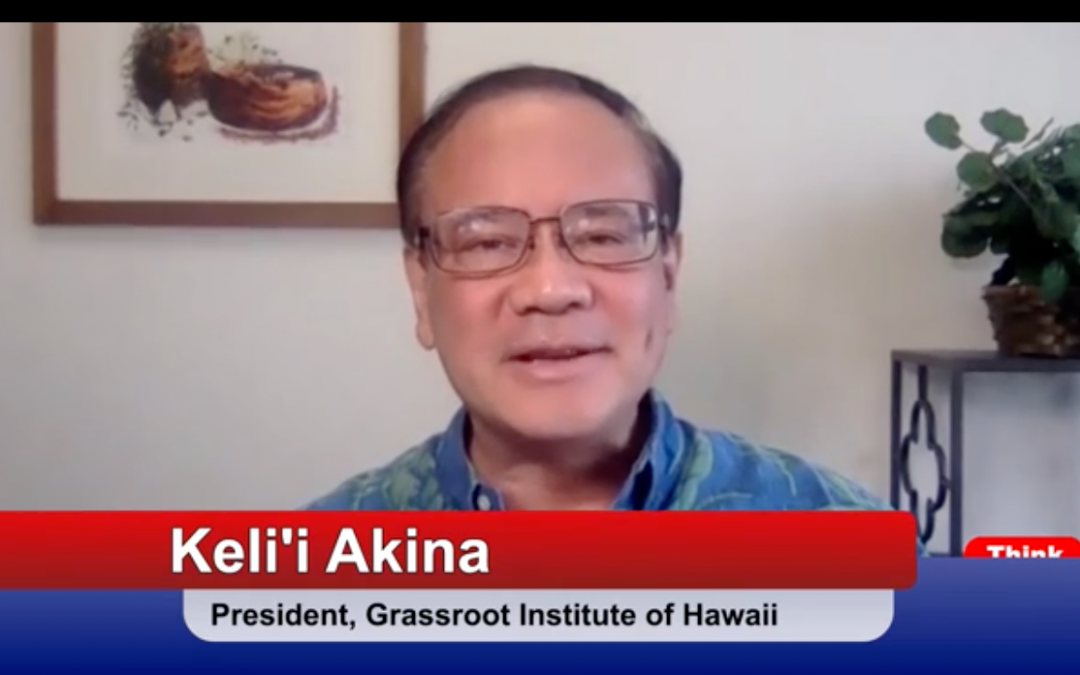 Jay Fidell, founder and president of the online ThinkTech Hawaii network, liked Keli’i Akina’s recent “President’s Corner” column so much (“Increase economic freedom, not state tax burden,” Jan. 29, 2021) that he asked him to produce a spoken version for the network. If you would like to have Akina’s weekly “President’s Corner” column emailed to you each week, please call 808-591-9193 or email info@grassrootinstitute.org.

It has become an annual tradition, just like counting in the new year or setting off fireworks on the Fourth of July. Every year in late January, we observe the running of the new tax proposals.

It doesn’t seem to matter if the economy is good or bad, if the state budget is in trouble or in surplus, or even if the country is going through a global depression sparked by a pandemic. The opening of the Hawaii Legislature is always the signal for the introduction of new tax bills, sometimes dressed up as “surcharges,” “fees” or “closing loopholes.”

This year is no different. So far, the Grassroot Institute of Hawaii has identified dozens of new tax bills for consideration during the 2021 legislative session, including:

>> A car tax on the purchase of any non-zero emission vehicle.

>> A three-year surcharge on the liquor tax (literally a tax on a tax).

>> A proposed constitutional amendment to remove the exclusive authority of the counties to tax real property so that the state can do so as well.

>> New taxes on the struggling tourism industry, including a sustainable tourism tax and a surcharge on the transient accommodations tax.

>> A carbon tax and hike in the barrel tax that would increase the tax on gasoline to 56 cents a gallon, from 3 cents a gallon now.

It isn’t clear whether these tax hikes are being proposed in a misguided attempt to bring in more state revenues, but there is wide agreement that tax increases are the wrong move for Hawaii’s struggling economy.

Even Gov. David Ige said this week that “tax increases are not necessary at this time,” citing revised revenue projections from the Council of Revenues that could add $471 million to the fiscal 2022 budget.

The sad fact is that Hawaii’s businesses and residents already are subject to some of the highest taxes in the country. More taxes would only slow our recovery.

Forget launching expensive new projects. Instead, the Legislature’s focus should be on helping residents and rebuilding local industries. Reviving the economy, in turn, would generate the tax revenues our state so desperately needs.

The simple truth is that you don’t need to raise taxes to increase state revenues. You simply need to encourage economic growth. Allowing entrepreneurs and businesses to get back to work do what they do best — produce goods and services, provide jobs and generate taxable profits — would yield all the tax revenues our legislators could want to balance the state’s budget.

Consider that the new projections from the Council of Revenues were based on only a few points worth of economic improvement, but they resulted in a substantial boost to the budget.

By putting our focus on bringing back the economy — such as through the recommendations presented in the Grassroot Institute’s “Road map to recovery” — we could have the best of both worlds: higher state revenues without higher taxes.