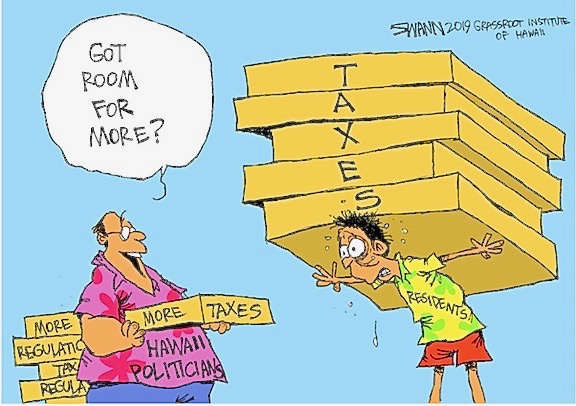 The following is the revised version of a news release issued by the Grassroot Institute of Hawaii on March 25, 2021. It includes an expanded footnote and some language not found in the earlier verison.
_____________

Hawaii state tax revenues per capita exceed the national average by more than 100%, according to the Grassroot Institute of Hawaii

HONOLULU, March 25, 2021 >> Hawaii has the highest per-capita state tax quotient in the nation, according to new research from the Grassroot Institute of Hawaii.

Using data from the National Association of State Budget Officers and the U.S. Census Bureau, the institute calculated the per capita quotient for Hawaii to be $5,428 in fiscal 2020, down slightly from $5,593 in fiscal 2019, probably due to lagging tax payments.[1]

The data shows that Hawaii’s general excise tax was responsible for the largest share of the state tax revenues, at $2,502 per capita for fiscal 2019. Since the tax is regressive, falling most heavily on those who earn the least, even those in the lowest economic brackets pay a hefty portion of their income to the state.

“I hope these new findings will cause our state legislators to stop adding new taxes,” said Keli’i Akina, institute president and CEO. “Everyone talks about the high cost of living in Hawaii and how it forces so many of our friends and family to leave for the mainland. But here we see one of the biggest reasons for that high cost of living: Hawaii’s sky-high taxes.

“Especially now, in the midst of Hawaii’s worst economic crisis in decades, we need our legislators to understand that that these high taxes are hurting our state. They are contributing to the state’s net population loss and doctor shortage, discouraging investment, and making it impossible for people to thrive, raise families and enjoy living in our state.”

In terms of county taxes, Hawaii’s per-capita county tax quotient ranked 25th in the nation as of fiscal 2018, the most recent year for which data is available.

[1] “Grassroot Institute of Hawaii calculations of state and local taxes per capita FY 2018 – 2020,” Grassroot Institute of Hawaii, March 23, 2021, Excel file. Note: This analysis divides the state tax revenues of each state by their respective populations. It does not account for tax shifts due to out-of-state residents such as tourists or military.