Imagine there’s no doctors; it’s easy if you tax 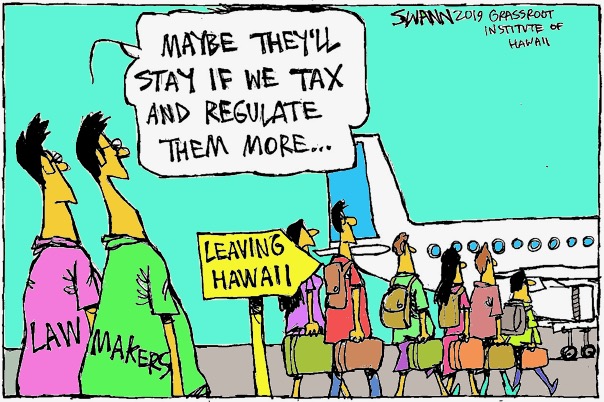 Over the past year during the COVID-19 crisis, we have seen just how important health care access is to the people of Hawaii. Yet, despite that lesson, our policymakers at the Capitol seem determined to continue policies that have contributed to Hawaii’s severe shortage of doctors.

Those would be the same policies that have caused so many residents and businesses to leave Hawaii in recent years: taxes and regulation.

On Monday, I spoke on my “Hawaii Together” program on ThinkTech Hawaii with two experts deeply involved with this issue: Lisa Rantz, president of Hawaii State Rural Health Association and executive director of the Hilo Medical Center Foundation, and Dr. John Wade, a radiologist and member of the Hawaii Physician Shortage Crisis Task Force. Both were adamant that tax and regulatory changes are needed to resolve Hawaii’s shortage of doctors and other health care providers.

Dr. Wade said Hawaii might have near-universal health care insurance coverage, but that’s not very meaningful if there are not enough doctors to provide the health care that’s needed. Currently, he said, Hawaii is down by more than 1,000 physicians, with no prospect of the situation improving. New doctors are few and far between, and many of the existing doctors are nearing retirement.

On Hawaii Island, for example, where both Rantz and Wade are based, the number of doctors is about half of what it should be. For some specialties, there simply aren’t enough doctors on the island to handle the caseload.

Wade said a major problem is that Hawaii’s private practice doctors are not exempt from the state general excise tax. The GET is applied to their gross revenues and by law cannot be forwarded to the patients. As a result, it functions less like a sales tax than an income tax. It also puts the doctors at a competitive disadvantage with hospitals and nonprofits, which don’t have to pay the GET, and ultimately takes close to 15%-20% of a physician’s net income.

There’s also the problem of Hawaii’s lowest-in-the-country Medicare/Medicaid reimbursement rates. As Rantz explained, the federal government doesn’t care about the Hawaii GET, so that cost isn’t built into federal reimbursements. That forces Hawaii doctors to “cherry pick” their patients.

“They can’t afford to have a panel that is entirely Medicare/Medicaid because the reimbursement rates aren’t high enough to cover the overhead, which is a fixed cost,” said Rantz. “This really boils down to an access-to-care issue for our community members.”

Rantz, Wade and many others have been making the case for years that taxation, low reimbursement and Hawaii’s high cost of living have contributed heavily to the state’s doctor shortage. So you can imagine their shock when the state Senate this month approved 24 to 1 SB56, a bill that would raise the state’s personal income tax rate from 11% to 16% for individuals making $200,000 or more — the highest rate in the nation.

“Frankly, from a health care standpoint, I think [SB56 is] apocalyptic.” said Wade. “We’re already having incredible challenges recruiting and retaining physicians in the state of Hawaii. How do you tell a young family with a 7-year-old that there just simply isn’t a pediatrician out there for you to see because we simply don’t have them in our state?”

Rantz said that after the news of SB56 broke, she heard from doctors “actively looking to relocate” to the mainland in search of lower taxes and higher reimbursement rates.

She said the word is out that Hawaii is not a viable place for a young doctor to set up a practice.

“When you have people who have been here for generations and generations, and they’re telling their children not to come back when they finish their graduate schools or finish residency programs, that’s not OK,” she said.

It seems inconceivable that Hawaii’s policymakers would want to drive away health care workers during the middle of a pandemic, but that’s exactly what they are doing with bills like SB56.

What can the Legislature do to solve the doctor shortage?

Wade said he and his colleagues have been working on targeted responses, such as a GET exemption for medical services and better Medicare/Medicaid reimbursement rates.

The Legislature has largely ignored those calls for help. But to its credit, the Legislature this year is considering a bill that would remove “certificate of need” restrictions for certain health care facilities and services. There also are resolutions in both the House and the Senate calling for a reexamination of the certificate-of-need system as a whole. And there are bills that would normalize “telehealth” in Hawaii.

Wade emphasized, however, that a bigger part of the solution comes down to whether our policymakers are capable of embracing the change needed to create a healthy economy overall — not just for doctors but for all businesses and residents of Hawaii.

“I think that our legislators and our governor need to look at these larger systemic issues, which adversely affect the economic playing field on which all businesses operate in the state of Hawaii,” Wade said. “If you want to have a healthy 21st-century economy, you need to look broadly at the things that you’ve done up to now that aren’t working. You can’t simply continue to do more of the bad ideas that have gotten you into the situation in the first place. I think our political leadership needs to exercise imagination.”

I concur. And if any of our lawmakers are looking for some policy prescriptions that could help, I have a “Road map to prosperity” I’d be happy to share with them.