HONOLULU, Aug. 17, 2022 >> A new report from the Grassroot Institute of Hawaii explodes the popular notion that out-of-state buyers are responsible for Hawaii’s high housing prices.

The report, “The ‘outsider’ theory of Hawaii’s housing crisis,” is the first of its kind to analyze data from not just Hawaii but from all 50 states and the District of Columbia, plus more than 2,300 counties nationwide, to determine the relationship between “outside” buyers and median home prices.

The question to be answered was: “Do all states and counties across the U.S. that have high percentages of outside buyers also have high median home prices?” 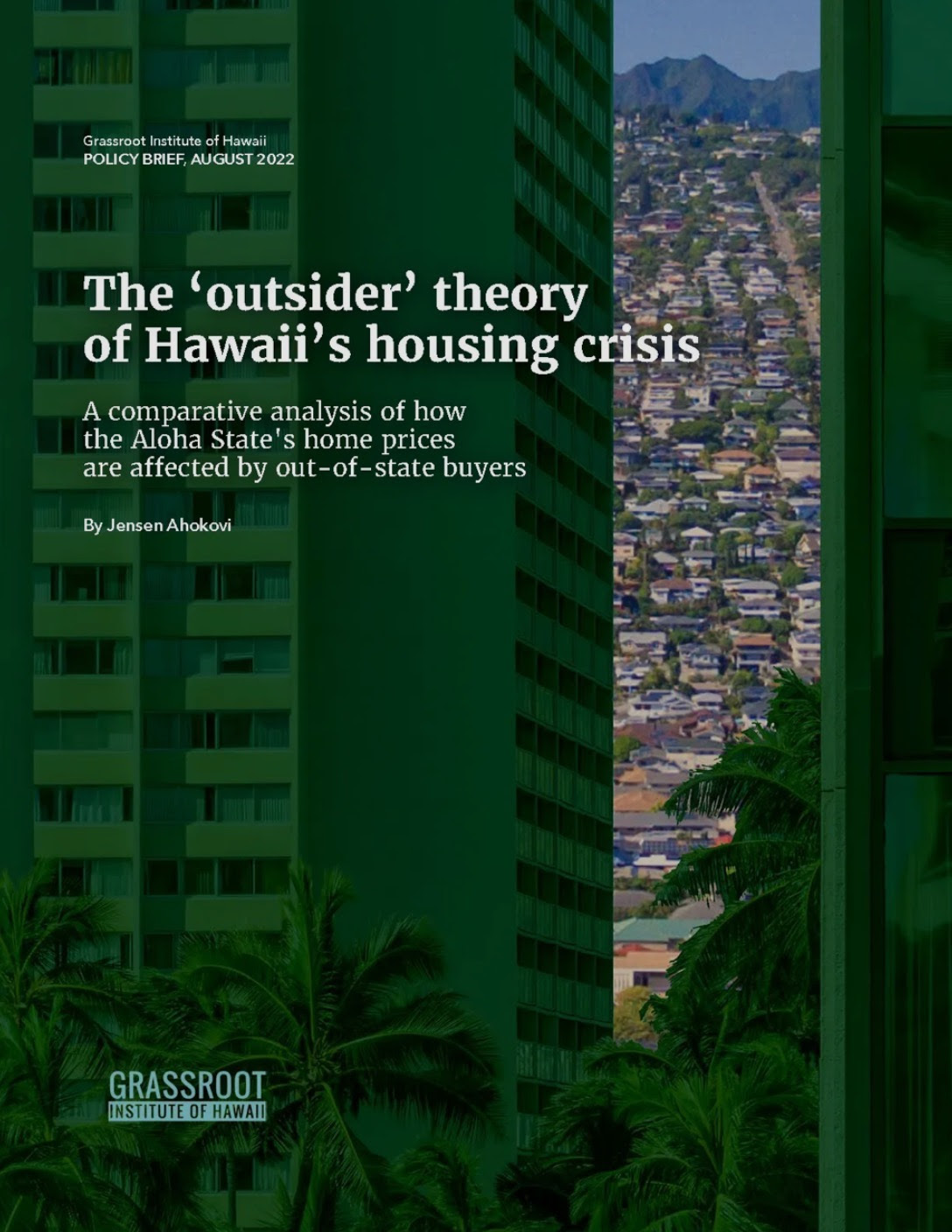 However, the jurisdiction with the second-highest median home price, at $618,100, was the District of Columbia; its out-of-state buyer share was only 4.9%, below the national average of 7.3%.

California had the nation’s third-highest median home price, at $538,500, but the second-lowest share of out-of-state buyers, at 1.9%.

Delaware and Maine had out-of-state-buyer shares similar to Hawaii’s, both at roughly 19%, but their median home prices did not deviate much from the national average of $244,604.

Looking at the entire U.S., the relationship between outside buyers and median home prices was “statistically insignificant,” based on the Institute’s analysis of home sales data from the Hawaii Bureau of Conveyances and nationwide tax-assessment data provided by the American Enterprise Institute’s Housing Center (AEI Housing Center).

The new report, by Institute research associate Jensen Ahokovi, is careful to point out that the findings do not mean that outside buyers have no effect on local home prices, only that they are not a significant factor.

In fact, between 2011 and 2020, the share of outside homebuyers in Hawaii trended downward, yet home prices kept increasing.

“Out-of-state buyers are just one determinant of the price of housing. In Hawaii, as elsewhere, there are many other factors, including, most importantly, government regulations. To that point, most research finds that land-use regulations comprise the primary reason for the current condition and large increase of home prices in the nation’s most expensive locales. Rather than scapegoat out-of-state buyers, Hawaii policymakers should focus on reducing the number of governmental regulatory barriers that restrain the state’s housing supply.”

In his introduction to the report, Keli‘i Akina, Grassroot Institute of Hawaii president and CEO, says:

“The outside-buyers myth is widely believed, but to the extent that such buyers have any impact at all, the evidence shows it to be statistically insignificant. What is significant is that focusing on policies meant to discourage outside buyers will do little to help the average local family that wants to find an affordable home.

“If we want to address Hawaii’s housing crisis, we cannot be misled by our preconceptions. Real change cannot happen until we properly identify the source of the problem. In this case, that means addressing the substantial regulatory barriers to housing in our state — not getting distracted by the ‘outsider’ theory or any other myths.

“Our inclination may be to look outside Hawaii for the causes of the housing crisis, but we cannot ignore the facts. The solution to Hawaii’s housing crisis — like the problem — begins at home.”

To read or download a copy of the report, go here.

High cost of living drives family, friends out of Hawaii

Could this be a good year at the Hawaii Legislature?

To the Hawaii Legislature:

Hawaii families face skyrocketing healthcare costs and a shortage of doctors. Exempting medical services from Hawaii’s general excise tax would result in millions of dollars in savings for residents and help bring doctors back.

Add your name by signing below!