The Grassroot Institute of Hawaii’s petition to exempt medical services from the state’s general excise tax was the lead story in Sunday’s Hawaii Tribune-Herald, based in Hilo.

Written by reporter Grant Phillips, the story also was published in West Hawaii Today, which is also a Hawaii island newspaper, but based in Kailua-Kona.

The petition, which can be viewed here, calls on lawmakers to exempt medical services from the state’s general excise tax, which is like a sales tax but applies to every transaction level.

Doctors in Hawaii have been complaining for years that the tax is akin to the straw that broke the camel’s back, considering the many other challenges doctors face in the Aloha State.

Phillips cited a 2021 report by Dr. John Wade of the Hawaii Physician Shortage Crisis Task Force, which noted that every Medicare, 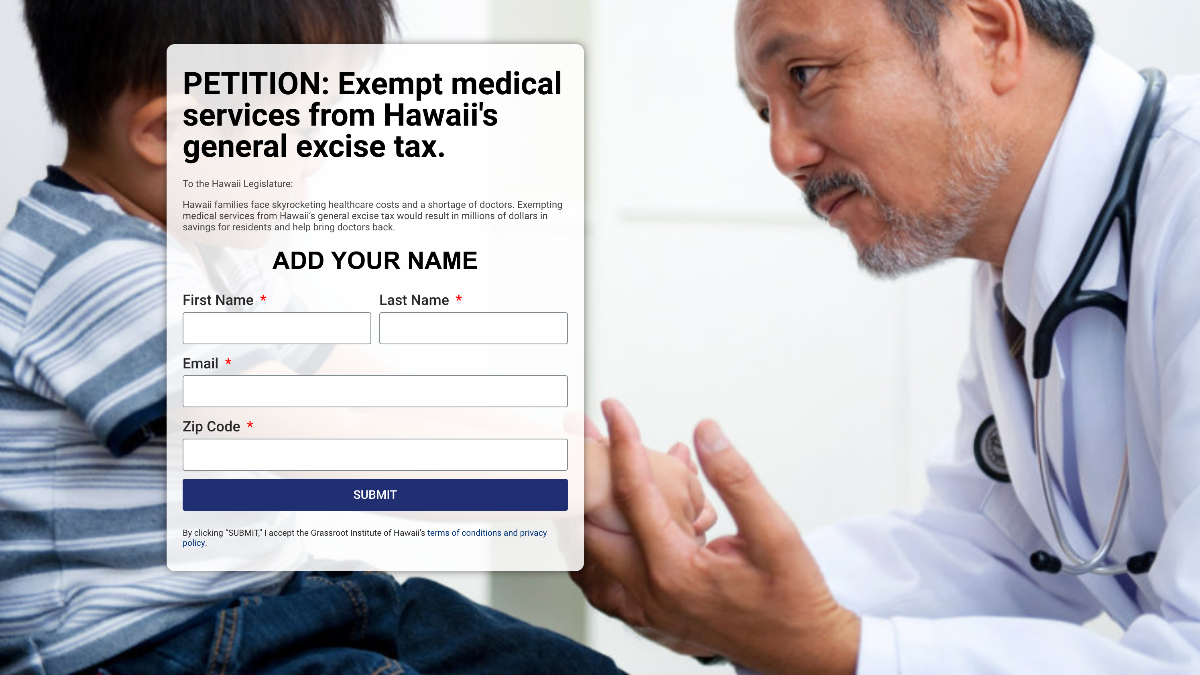 Medicaid and TRICARE dollar earned by doctors is subject to the state GET, making Hawaii the only state in the nation that taxes private practice medical services in this way. Wade called the tax “a private practice killer,” since nonprofits, hospitals and providers such as the Hawaii Medical Service Association are exempt.

Lisa Rantz, executive director of the Hilo Medical Center Foundation, told Phillips that other factors behind the shortage of roughly 300 physicians for Hawaii County — and over 1,000 across the state overall — are the low reimbursement rates for the federal medical insurance programs and Hawaii’s high cost of living.

In announcing the petition, Institute President Keli‘i Akina acknowledged there are many causes of Hawaii’s healthcare crisis. But he also said, as Phillips reported, that, “Exempting medical services from the GET would be a major first step toward providing long overdue and much-needed relief.”

Phillips also quoted Gov. David Ige, who during a livestream interview the previous Wednesday cautioned legislators to not “chip away” at the GET, because “there’s always a lot of things people think we shouldn’t tax, and as you begin to exempt them, then the excise tax becomes less and less efficient, and you end up raising taxes someplace else.”

The Institute’s response to that, of course, is that there already are almost 60 GET exemptions, including for things such as orchard operators, enterprise zones, aircraft service and maintenance, petroleum refining and stock exchange transactions, and if exemptions are made for those, then why not the seemingly more essential medical services?

As for raising other taxes to compensate for the lost revenue, there is no rule that says every tax cut must result in a tax hike somewhere else. How about cutting spending to compensate? Isn’t it time for our lawmakers to start thinking outside the usual tax-and-spend box?

To read the rest of Phillip’s excellent article, go here. To sign the petition to exempt medical services from the state GET, go here.

Is overly zealous zoning the cause of Hawaii’s acute housing shortage?

Why Hawaii zoning laws should be abolished

Does anyone really believe stadium project will pan out?

To the Hawaii Legislature:

Hawaii families face skyrocketing healthcare costs and a shortage of doctors. Exempting medical services from Hawaii’s general excise tax would result in millions of dollars in savings for residents and help bring doctors back.

Add your name by signing below!